Cheats, Tips and Questions for Marvel's Guardians of the Galaxy

Marvel's Guardians of the Galaxy is an action-adventure game based on Marvel Comics' Guardians of the Galaxy comic book series. The story starts several years after the events of a massive interstellar war that involved or affected nearly every civilization across the galaxy. Peter Quill the Guardian known as Star-Lord and his crew of mercenaries sees this period of recovery from the aftershocks of this war as an opportunity to exploit the situation to make some money during their adventurous wanderings around the galaxy. Marvel's Guardians of the Galaxy is available on PlayStation 4, PlayStation 5, Xbox One, Xbox Series X, Switch, and PC. Take a look at our tips to get help in the game. 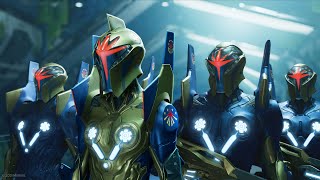 Marvel's Guardians of the Galaxy Trailer


How to Use Star-Lord


You play the role of Star-Lord, the leader of the Guardians of the Galaxy and the reason why he has a pair of jet-boots is to allow him to dash, jump out of reach, and stay clear of enemies. Although Star-Lord can be effective during melee combat, he is better suited taking a middling-distance approach, where he can survey the battlefield as he fires his blasters and directs the other Guardians. The best strategy for Star-Lord during battles is to keep him in the air as much as possible, as it enables you to get him to where he is needed quickly.


This is not as relevant early in the game when you don't have many kinds of attacks at your disposal, but later on it will help you considerably if you pay attention to the little markers that are next to the enemy health bars as they show what kind of damage you should be inflicting on them, both for increased stagger and depletion of their health. These markers will also update during a battle to reflect the changes on the enemy condition. If you invest in the Tactical Scan Perk for Star-Lord's visor, you will also be able to get data on the vulnerabilities of the enemy you are facing, which you can then use to your advantage to compromise them.

Scan when you are Stuck


When you are not battling enemies or arguing with your crew, you will be exploring locations around the galaxy. This journey though can sometimes come to a grinding halt when your path ahead is not obvious. When this happens, it usually means you need to activate your visor and start scanning objects until you or one of your crew can interact with it, which will then allow you to progress into new areas. Take a look at our Collectibles Locations guide to find out where each of them are hidden in Marvel's Guardians of the Galaxy.

Spread out your Ability Points


It is crucial that you spread out the Ability Points that you earn amongst your crew and don't dump all of them into Star-Lord because he is your character and leader of the crew. If you do this, you will leave the rest of your team without a diverse array of attacks at their disposal, which will limit your options as a team during battle. Take a look at our Best Abilities to Unlock First Guide to find out what abilities you should prioritize first in Marvel's Guardians of the Galaxy.

Use Other Guardians Abilities Often


During the Chapter 1 of Marvel's Guardians of the Galaxy, the game will introduce you to each of your crew's special abilities that you can ask them to use during battle by using the Guardians Mode menu. Each of the Guardians abilities has a cooldown timer before you can use it again. Make sure you use them whenever they are available during combat, as they will make tough battles a lot easier to deal with. Take a look at our How to Craft Perks Guide to find out how you can improve the capabilities of the Guardians in combat.


Star-Lord is able to melee attack enemies as well as shoot them with his blasters, these attacks will either be punching or kicking. Although melee attacks will do less damage and make you more vulnerable because you are close to the enemy, they will enable you to pick-up more health drops when you defeat them, which will allow you to replenish your HP a bit more.


Use your Surroundings in Battle


Pay attention to your surroundings when you are in battle, as there will sometimes be objects there the Guardians can use as weapons. If you use Guardians mode, you can instruct your crew to use the environment in battle. An example of this is telling Drax to throw barrels or rocks at enemies.

Take a look at our Beginners Tips and Tricks page to get additional help in Marvel's Guardians of the Galaxy.

Marvel's Guardians of the Galaxy Guide

Latest updates to our guide:
How to Change Songs
Huddle Up Answers
Collectibles Locations
How to Beat Dweller-In-Darkness Boss
Walkthrough / Guide

Join us on Discord
Are you an expert in this game? Can you help Marvel's Guardians of the Galaxy players?
Reviews
No reviews listed yet.