How to Defeat the Final Boss (Teratomo) 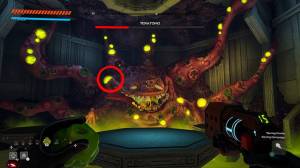 Don't be decieved by the hit markers when you shoot at Teratomo's eyes or gold tooth as these are not the creatures weak spots. This boss has dozens of pustules surrounding its head and tentacles and each one you destroy with your laser gun will remove a sliver of its health. What makes this tricky to accomplish is that when you are on one of the front circular platforms, Teratomo’s tentacles will smash them to bits and if you are on one of the back platforms his lava spill attack will make them catch fire forcing you to grapple to another platform. There are three phases in this battle.

• Phase 1
Teratomo periodically launches three explosive blobs that you must dodge. This boss also spawns two Jellywafts which it is important that you kill immediately since their poison attacks also apply a damage-over-time effect.

• Phase 2
In this phase Teratomo will not spawn explosive blobs but its lava spill attack will cover all the back platforms.

• Phase 3
Teratomo's explosive blobs attack will begin again and you will need to avoid six of these. In this phase it will summon three Jellywafts which again you need to dispose of as quick as you can.

If you have the Reflecting Shot gun upgrade which you earn from completing a certain number of Science Experiemnts you will find it useful here in taking down Teratomo. When your clip is full press the reload a few times to charge the game up and then nail the timing mini-game twice to get the reflecting shot, which is red. Once you correctly charge your bouncy shot you can aim at the tentacles and knock out several of them. Once you have managed to bring down a third of his health Teratomo will roll out his tongue. When this happens you need to quickly run up to the boss and interact with the thing trapped inside his mouth. Eventually if you keep repeating these steps Teratomo will die.

Check out our Science Experiments Guide to find out how you can unlock essential tools and upgrades that will allow you to progress in the game and defeat bosses.


Previous Page
How to get the Shock Fruit Sabilizer
Top of
Guide
Guide Menu
▼ CommentsVerdict:
Very Helpful OK Not Useful

Comments for How to Defeat the Final Boss (Teratomo)

112An SOS to some old friends (former members, come chat)