DKO, or Divine Knockout, is a fast-paced Brawler set in a stylized world of Gods and Mythology. DKO combines physics-based combat, a vibrant roster of deities and Third-Person combat that puts you right in the heart of the action.

No confusing button combos, unleash devastating abilities at a push of a button. Hurl boulders as Hercules, unleash the might of Excalibur and wield Mjolnir with ease. Juggle foes, don't struggle with controls. In DKO's core 3v3 mode, each round is a new adventure - and a new mode. Or play intense 2v2 and 1v1 duels. 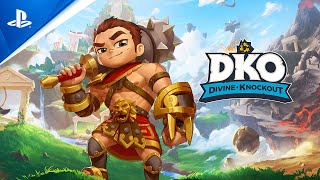 
Below is a collection of hints and tips that will help you to progress in the game. These include why counter attacking is just as effective as attacking and why you must always be aware of your surroundings. As well as these hints and tips, we also have a Beginners Guide here which goes into more details on some of the tips we have below:


Keep in mind that although you need to attack your opponent to win you don't necessarily need to be the first to attack. In Devine Knockout counter-attacking can be just as effective as attacking, especially when your opponents use their abilities. Some characters have attacks where there is a punishable moment called an end-lag whereby the character is locked in an ending animation to their move. When this happens it is the perfect time to attack them and not suffer any retaliation.


It is important that you try and read your opponents' moves to ensure that you don't end up being caught in their attacks as this can easily result in you being juggled in their combo and subsequent defeat. Being able to read character moves and timings is the key to victory in Divine Knockout.

Use the Edge of the Arena


When you are playing on the edge of the arena you need to know exactly how your character plays and understand what is available to them in regard to where they can move to save them falling off. Skilled players can bait the opponent to the edge and then outmaneuver them.

Be Aware of your Surroundings


It is crucial that you have spatial awareness in the arena as there is a drop to permanent death on all sides. Make sure you are aware of where you need to move and how far. It is also essential that you know where to push enemies, so you force them into a tight situation where they are at a disadvantage as they not only need to focus on attacking but also trying to get back into the arena.


Take a look at our Beginner Tips and Tricks page to get additional help in Divine Knockout.

Latest updates to our guide:
How to get the TimTheTatman Hercules Skin
Character Tier List
Beginner Tips and Tricks
Divine Knockout Walkthrough and Guide
Walkthrough / Guide

Divine Knockout Questions & Answers
Our Latest Questions
Can your merge xbox account to pc?
When can you use your Ultimate ability?
How do you knock out an opponent?
See All Questions
Have a question for Divine Knockout?
Achievements & Trophies

There are 20 trophies for Divine Knockout on PlayStation 4.

Join us on Discord
Are you an expert in this game? Can you help Divine Knockout players?
Reviews
No reviews listed yet.