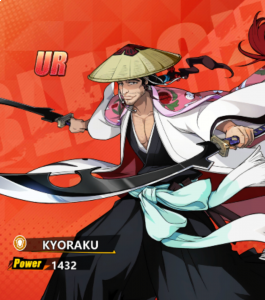 Kyoraku is a laid back and flamboyant man, he is the captain of the 1st Division and Captain-Commander of the Gotei 13. Kyoraku is a Master Swordsman, he is highly adaptable combatant as his two swords have enabled him to become ambidextrous. His two swords move at a different pace, something he takes advantage of while fighting. Although Kyoraku is a Hakuda Combatant he instead prefers to rely upon his other fighting skills before resorting to hand-to-hand combat.

Skills
Bonds
Kyoraku has Immense Spiritual Power and possesses Reiatsu. He also has Enchanced Strength and Durability which enables him to move around and fight as he usually does even after being shot multiple times. Kyoraku is Shunpo Master and possesses great skill in Kido. He is also a Master Strategist and Tactician.

Talent
Captain of Squad 8:
In Battle Arena and Knepachi Karnage, Crit Chance and Crit Resist Chance of all characters are increased by 0.8%


Bushogoma (Rage Skill)
Deals damage to 3 random enemies. Deals 80% additional damage to Attack-speciality characters and recovers HP to self equal to 15% of the ATK. After Weapon awakens, the damage is increased greatly and increase target's healing reduction rate.

Friends for Life
When all characters are owned, ATK increases by 15%

Squad 8
When all characters are owned, HP increases by 15%

Students and Teacher
When all characters are owned, HP increases by 15%