Cheats, Tips and Questions for Ashen

Ashen is an open world co-op action RPG where you play the role of a wanderer in a sunless land in search of a place to call home. The only light to be had sputters from an age-old lantern at your side. Fight alongside others, forge friendships and defeat the creatures of shadow determined to cast the world back into darkness. Ashen is available on PlayStation 4, Xbox One, Switch, and PC. Take a look at our tips to get help in the game. 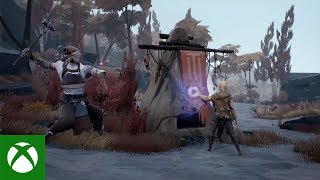 Take a look at our Ashen Walkthrough and Guide to get additional help in the game. This includes how to upgrade weapons, where to find healing items, and a guide for the various Side Journeys which you can choose to undertake to get rewards that are essential for your progress in the game.
To get the Twin Hearts of Lathyrus achievement/trophy you must reunite the Listener and Human hearts. You will be able to unlock this achievement/trophy after you have defeated King Omar, the Shadow of the Ashen in the Palace of Lathyrus.

To do so you must access an area called he Gnaw by entering a hexagonal shaped hole and progress to Amra's objective in order to find Gefn, a giant mermaid-like progenitor of humanity. Once you encounter Gefn a scene will play out and the achievement/trophy will become unlocked.
To get the Squork achievement/trophy you must hunt a squork. In Ashen squorks are little blue crow-like birds that can be found around Vangrant's Rest. You will find this creature difficult to hit as you can't lock on to them. The two easiest ways to unlock this achievement/trophy is to either wait until one is taking off and quickly run up to it and hit it with your running attack or wait until you unlock spears and target one from a distance. If you manage to kill a Squork and you do not unlock the achievement/trophy you can fix the issue by switching off the AI companion.
To get the secret Diasora achievement/trophy you must free the Diasora pup. In order to do this you must defeat the Garoran boss which is the second boss of the game. The easiest way to beat him is to upgrade your weapon twice, then bait out his attacks, he is especially vulnerable after his ground slam explosion. Try to hit him 1-2 times after he performs this attack from behind to help avoid counter-attacks. Make sure you just focus on Garoran, and try to ignore the skeletons he summons as much as possible.

If you keep attacking Garoran hard and fast you should be able to defeat him before he can summon too many skeletons. When you have defeated Garoran you will also unlock fast travel which will make traversing the map much easier.
To get the Malik's Curse achievement/trophy you must wear the Umbral Veil which is a relic that enables you to survive a single killing blow and makes your appearance become that of a wraith. To obtain this relic you must defeat King Omar, the Shadow of the Ashen and the penultimate boss in Ashen. Once you defeat the boss progress to the next relic shrine in order to return to the Vagrant's Rest where you will then be able to purchase the Umbral Veil relic for 10,000 Scoria at the crafting table for Amara.
Ashen Questions & Answers
Have a question for Ashen?
Achievements & Trophies

There are 34 achievements for Ashen on .