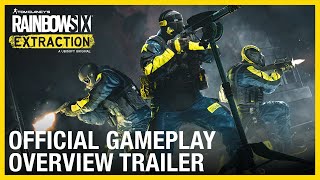 
Below is a collection of hints and tips that will help you to progress in the game. These include why you should prioritize preventing the enemy howl and why you should use your Operators gadgets and abilities whenever necessary. As well as these hints and tips, we also have a beginners guide here which goes into more details on some of the tips we have below:


If an Operator in your team is spotted by the enemy during an incursion, you will hear a little chime as confirmation. Once you have heard this chime you will have just a moment to deal with the enemy before it howls, alerting nearby enemies to your presence and bringing them swarming to your location. It is crucial for the success of your incursion that you prioritize preventing the enemy from raising the alarm. There will often be times it can't be helped, and in those situations you need to sweep that location as quickly as you can to remove activated Nests in order to stem the tide. If you don't do this, you will find yourself wasting resources fending off endless waves of enemies.


Some objectives in Tom Clancy's Rainbow Six Extraction require you to defend an area from swarms of Archaean attackers. It is recommended that before you attempt these objectives, you first clear any Sprawl from the ground. The reason why you should do this is that you are entering Archaean territory and clearing their Sprawl attacks their ecosystem and makes them weaker, letting you deal more damage. It will also enable you to quickly escape when necessary.


If you play efficiently, there is no need to fear the biofluid called Sprawl that is released when you kill the alien enemy. If you avoid activating Nests and don't perform sloppy kills, you will be able to control the spread of Sprawl. Even in its acidic mid-tier Mutation you will not sustain too much damage from it if you need to traverse small patches. There are several ways to destroy Sprawl including using melee attacks or with gunfire, so don't be afraid to get in the muck and blast your way out if you have been backed into a corner. Don't be a sitting duck.


Pay attention to your three objectives before selecting your Operator. Knowing what the mission goals and Mutation are beforehand will enable you to give your team the best chance of success by allowing you to pick the Operator best suited for the task. For example, you may want to consider Jager in a zone defense mission like Sabotage, so you can take advantage of the turrets of his Active Defense ability.


On each of the guns in Tom Clancy's Rainbow Six Extraction there is a UV light attached which you can aim at a nearby breachable wall and see straight through and spot enemies that are on the other side. Take advantage of this to orchestrate a tactical strategy that enables you to take down enemies quickly and with very little noise. Check out our Enemy Weak Spot Guide to find out where the weak spot is on the different species of Archaeans you will encounter during the game.


Make sure when defending an area you prevent attackers from entering the objective room by reinforcing walls and searching for interaction panels you can use to close doors leading into it. If there is a large gap leading into the objective room that you can't block, use the Field Wall gadget (unlocked in Tech Tier 3) to create a 6-meter wide field wall that blocks all Archaean projectiles.


Use your Gadgets and Abilities


In Tom Clancy's Rainbow Six Extraction you will have plenty of opportunities to restock your gadgets and abilities, so make sure you use them whenever it feels necessary. This basically means you do not have to worry about that next sub-zone or an upcoming boss encounter, as you will be able to find plenty of supply crates to recharge and refill before the next encounter. Take a look at our Operator Tier List to find out which characters have the best gadgets and abilities in Tom Clancy's Rainbow Six Extraction.

Extracting is Always an Option


Keep in mind extracting is always an option if you find yourself suffering lots of damage or major casualties from the enemy. Although extracting early may feel like a defeat, it is far better to leave early and bank some easy XP instead of pushing to the end and losing your operator to the Archaeans resulting in you having to rescue them.


When an Operator is taken down in Tom Clancy's Rainbow Six Extraction, they will be covered in a foamy substance that protects them from death. If they are then not rescued and left behind they will become MIA which will result in you losing any XP the Operator may have earned and also block them from further use. However, if you decide to rescue the Operator you will regain the XP they earned, keep in mind that failing the rescue mission will mean losing 30% of the lost XP permanently. If the Operator was a high level, and you want to level up quickly or unlock new Operators, it is worthwhile attempting the rescue.

Take a look at our Beginner Tips and Tricks to get additional help in Tom Clancy's Rainbow Six Extraction.