Cheats, Tips and Questions for The Walking Dead: The Telltale Definitive Series

The Walking Dead: A Telltale Games Series is an episodic video game series that takes place within Robert Kirkman's The Walking Dead comic series' universe. The game takes place in the same fictional world as the comic, with events occurring shortly after the onset of the zombie apocalypse in Georgia. The game is played from a third-person perspective with a variety of cinematic camera angles, in which you play the role of the protagonist Lee Everett, who works with a rag-tag group of survivors to stay alive in the midst of the zombie apocalypse. 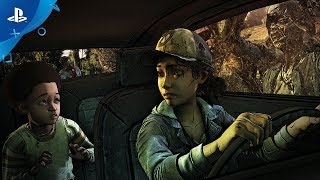 Look at the man trapped under the fallen telegraph pole over the road and use the remote on the TV shop opposite. Then use the axe on the gate lock and pick up the brick. Use the brick on the TV shop. The man that was trapped under the fallen telephone pole who tries to stop you when you hit the gate lock with the axe is Lee's brother, you need to kill him to get the keys to the pharmacy.
To get the Goodbye, She Quietly Says achievement/trophy you need to complete chapter 1 of episode 3. While in town looking for supplies with Kenny he will go up a ladder. The ladder will then break when you try to go up it which means you need to find another way to go up. Walk to the front of the jeep, and take the tow cable and attach it to the truck axis. Then make the jeep tow itself towards the truck. Climb the jeep and have Kenny try to pull you up. When this fails a woman will come out of a building screaming being chased by zombies. You then have to make a decision, both will unlock the achievement/trophy. You can either shoot the woman to put her out of her misery, or you can use her as a distraction to buy you more time to loot the pharmacy.
To get the Conversation Killer achievement/trophy you must complete chapter 2 of episode 2. Go around the camp and give out 4 food items.
Then walk to the fence on the right and talk to Mark and Larry who are working. Give the axe to one of them after they ask you for it. Katjaa will then call you and say that she couldn't save the man's leg you chopped off and that he died. He will then come back as a zombie and attack her, then you. Once you and the group have killed him the achievement/trophy will unlock.
The Walking Dead: The Telltale Definitive Series Questions & Answers
Have a question for The Walking Dead: The Telltale Definitive Series?
Videos