Cheats, Tips and Questions for Hellpoint

Hellpoint is an action RPG where you take on the role of a nameless humanoid stranded on derelict space station Irid Novo, and must battle vicious creatures in order to solve the mystery behind the events that happened there. Irid Novo orbits around a massive black hole; the station's position in relation to the black hole affects the strength of enemies. Hellpoint is available on Xbox One, Playstation 4, Switch, and PC. Take a look at our tips to get help in the game.

Explore Everywhere for Better Items
In order to find better items in Hellpoint it is essential that you explore every nook and cranny as more often than not they will be found in places where you are not supposed to be. This means not following a linear path but instead look for hidden doors and walls. You can open doors by pressing the interact button and strike the wall to break them.

Drain your Enemies Energy
The melee weapons in Hellpoint come with a stat called Leeching and initially you should look to use a weapon which has a higher Leech Stat. The reason being is that Leeching is the amount of energy you can drain per hit and the higher the Leeching stat the more energy you will be able to drain off your enemies.

Unlock Unique Weapon Abilities
Continuously using the same weapons for a long period of time in Hellpoint will unlock their unique abilities. Others though will require installing a conductor to the weapon to start unlocking abilities.

OfficialHellpoint Trailer
Backstab is an active melee weapon ability that is the 4th unlock of the Ceremonial Dagger and Sewing Anlace weapon. Backstab is particularly useful early in the game as it enables you to kill enemies quicker by sneaking in on them from behind. It is important to remember that this ability will not work if the enemy has seen you.
Early in Hellpoint the best weapon and Conductor combination is using the Reflex Conductor on a Lost Hatchet Weapon. You will find that this combination will enable you to win almost all the fights as the Reflex Conductor reduces the stamina usage enabling you to continuously spam Heavy Attacks on enemies to stagger them, making them easy to take down. You can find the Lost Hatchet weapon at Acrology downtown, sector 2-1 bridge.
In Hellpoint the Eye One tower is non functional but to raise the Eye Two tower you must enter in specific codes. Listed below are all the codes for the Eye Two Tower, but in order to enter them you must first reach the controls in each area. 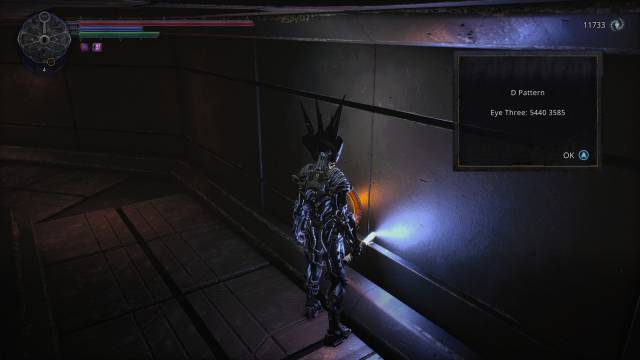 Pattern D: Ikari Walkways
Eye Three: 5440 3585
Eye Five: 2029 5238
It is vital in order to progress that you are aware of time by keeping an eye on the Black Hole clock in the upper-left corner of the screen. One of Hellpoint's unique mechanics is only being able to open certain doors and walls at specific times. The yellow circle on the Black Hole Clock tracks the current time. When it reaches specific points on the clock, one of two events will occur:

Hell Hour Time
There are two Hell Hours per day and during this time you can open the transparent orange walls you find throughout the station. When you enter the rooms on the other side you will trigger horde events that lock you in and pit you against a large group of enemies which if you manage to defeat will get you powerful rewards.