Cheats, Tips and Questions for Empire of Sin

Empire of Sin is a character-driven turn-based strategy management game set in the backdrop of 1920s Prohibition-era Chicago. You play the role of one of several mob bosses inspired by real-life figures during that era. Your job is to control the actions of your underlings to take over opponents' business and recruit new members to your cause while defending your own empire from the other bosses. Empire of Sin is available on PlayStation 4, Xbox One, Switch, and PC. Take a look at our tips to get more help in the game. 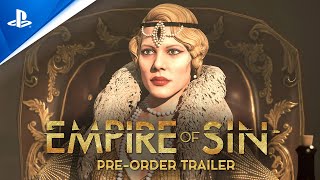 It is very important to remember that in Empire of Sin every decision you make will have some kind of consequence further down the line so it is crucial you think about your decisions very carefully before you make them. Pay attention to the characters that you hire and what they are capable of as these traits will become considerably more developed as you progress through the game.
In order to hire new crew members in Empire of Sin you must open the Black Book at the top corner of the HUD. Although there is a total of 50 unique characters you can recruit only a few will be available to hire at the start of the game.

As you progress through the game and your notoriety increases more characters will become available. Most of the characters are recruited through the Black Book but there are some that are picked up by exploring the streets of Chicage of by completing side quests.

Characters you recruit are paid differently, some are paid upfront while others have to wait for their dues. The higher the level of the character the higher their salary will be. Avoid delaying payments to crew members as this will effect their loyalty. You can only recruit 10 members and if you want to switch one for another character you will first need to fire one you don't need or kill them off.
The boss you will ultimately select will be the one that has the best perks for the line of business you want to get involved in. Without doubt the best bosses in Empire of Sin because of their balance of their diplomacy and aggression are Angelo Genna and Franky Genna.
There are 14 boss characters in total you can select from at the start of Empire of Sin, all of which have a different combat ability and unique bonuses that are associated with business and diplomacy. If you are unfamiliar with the game it will not matter which one of the bosses you choose as it won't be until you have played the game for a period of time that you will begin to get a better understanding of the game and know what it is what you want to do. It will be at that point that you will know which of the 14 boss characters best suits your playstlye and has the most beneficial perks. As the Tutorial involves taking over a brewery it is recommended that you start off by selecting a character with brewery related perks.
If you are new to Empire of Sin you will probably find the game confusing so it is advised that to begin with you take things slow and keep it simple. This means starting off with the least number of nieghborhoods and factions possible and slowly build things up as you get a better understanding of the game.
The fastest way to make money in Empire of Sin is to start a war with a rival gang, this means searching for their safehouse and then battling them. If you successfully wipe out the rival gang you will be able to take over their rackets and gain the money they generate. You have the choice of keeping the racket as it is which is free or converting it to something else which will cost you money. Listed below are the rackets you can take over or start.

Casinos
Gambling (you can get loads of cash through betting but if someone wins you can also lose a lot of money fast too).
Notoriety in Empire of Sin is gained as you progress through the game by recruiting characters, rackets, and by killing members of rival gangs. Killing an entire enemy faction including it's boss will give you a substantial increase in notoriety.

To be able to kill an entire faction you must be at war with them and then attack their safehouse. It is important to raise your notoriety as it allows you to recruit rackets and assign additional roles to crew members.

The other advantage of having a high notoriety is that the cost of racket and business upgrades will be reduced, the downside though is you will take a bigger diplomacy hit with rival gangs and cops.
Empire of Sin Questions & Answers
Our Latest Questions
Does my pc progress link to my xbox progress
How do I have alcohol at my casino? The game say..
See All Questions
Have a question for Empire of Sin?
Videos

Join us on Discord
Are you an expert in this game? Can you help Empire of Sin players?
Reviews
No reviews listed yet.