Cheats, Tips and Questions for Curse of the Dead Gods

Curse of the Dead Gods is a fantasy action roguelite game where you seek untold riches, eternal life, and divine powers. This leads to an accursed temple that has a seemingly-infinite labyrinth of bottomless pits, deadly traps, and monsters. Your greed will lead you to death, but that is not an escape. Curse of the Dead Gods is available on PlayStation 4, Xbox One, Switch, and PC. Take a look at our tips to get help in the game. 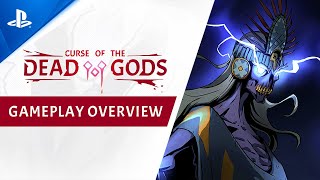 Curse of the Dead Gods Trailer

The enemies in Curse of the Dead Gods tend to have clear attack patterns that will give you openings for combos to build up your stamina. Therefore, the best strategy when you engage the enemy is to take the defensive approach while you identify their pattern. Whenever you see a red flash it signifies that the enemy is attacking, and you should parry the attack to stagger your opponent. Depending on the size of your arc there is the possibility that parrying a targeted enemy will interrupt other nearby ones.
In order to have a successful run in Curse of the Dead Gods it is essential that you explore everywhere despite the many dangers that lurk in the shadows. Only by exploring will you find the hidden rooms and be able to maximize the amount of gold, weapons, and mystical relics that you find. Basically the more risks you take the more rewards you can potentially earn.
It is crucial that in Curse of the Dead Gods that you always fight in the light as fighting in the dark will cause you to take more damage. Pay attention to the icon that is located at the bottom center of your screen as this indicates whether you are fighting in the light or the dark. The dark areas of the temple you traverse are filled with enemies and traps, so it is essential that you seek out light sources as you progress. Whenever there are none available you need to create your own by lighting braziers, cobwebs, and even enemies.
In Curse of the Dead Gods you will have access to both melee and ranged weapons which will be mapped to separate buttons on your controller making it easy to switch between them. To avoid taking damage try and keep enemies as far away from you as possible by dealing with them first with your ranged weapons and then quickly switch to a melee weapon when they are close to finish them off. Always pay attention to your surroundings to see what is available to create traps. If you see an explosive barrel near a group of enemies set it off by shooting at it with a ranged weapon such as a pistol to deal damage to the enemies. Lure enemies that are close to spikes and poison streams and then push them into them.
It is crucial that you avoid Corruption damage at all times as it will rise until you are cursed with one of fourteen curses and then restart at zero and starts the cycle anew. Getting Corruption curses is a burden and includes things like traps set themselves off, corpses become dangerous to touch and collecting gold raises your Corruption level. In order to avoid getting Corruption damage you need to stay out of the dark, stay away from enemies that deal Corruption damage, only trade gold for certain items, and only heal at shrines when necessary.
Curse of the Dead Gods Questions & Answers
Have a question for Curse of the Dead Gods?