PC PS4 PS5 XOne XboxXS
Add Stuff / Ask Questions
Thank you for printing this page from www.SuperCheats.com.Remember to come back to check for more great content for .

How to get the Mind Trip Trophy/Achievement for Call of Duty: Black Ops Cold War

How to get the Mind Trip Trophy/Achievement

On your first playthrough of the mission follow Adler's orders for each of the first three scenarios. Doing so will give you the cave path for the first scenario, the village path for the second scenario, and the napalm strike path for the third scenario. In the fourth scenario it does not matter if you decide to follow Adler or not. All four intended memory endings will have you enter a room where Persus is staring at a board on the other side of a table.

After completing the first playthrough you must complete a second playthrough where you disobey Adler in the first three scenarios. You just need to make sure you go down different paths in the first two scenarios that were not the intended ending. You will know you have chosen a new ending once you go through the red door and a different room than the intended Persus room is present. On the third scenario you need to go right at the first fork and instead of going into the cave, go right toward the giant Lenin statue where you will see a hidden trapdoor. When you go through the trapdoor you will reach the secret fourth path. In this scenario you must die to continue. Now just go through the red door hallways until you get to the seventh and final memory ending. 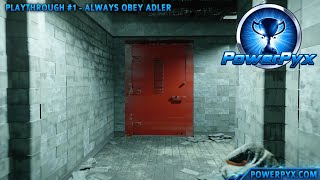