Bleeding Edge is a 4x4 hero brawler with MOBA-lite combat and objective modes that pits two teams of four players against one another in objective based melee combat. The game is set in a futuristic world of New York in the year 2057 where world governments have become corrupt and coporate society just stands by and looks on. Bleeding Edge features diverse characters, abilities, counters, and strict roles grouped by damage, tank, and support. The game currently has 12 characters (Buttercup, Daemon, El Bastardo, Gizmo, Kulev, Cass, Maeve, Makutu, Miko, Nidhoggr, Zero Cool, and Mekko), five maps (Boneyard, Skygarden, Aquducts, Jersey Sink, Landslide), and three modes (Control, Objective Control, and Power Collection). Check out our Bleeding Edge cheats and tips to get help in the game.


Below is a collection of hints and tips that will help you to progress in the game. These include customising your character and visiting the Dojo. As well as these hints and tips we also have a mini-guide here which goes into more details on some of the tips we have below:

As you progress through the game you will earn unique mods for your character which will allow you to boost the stats of your fighter. Mods are obtained by completing matches or can be purchased with 250 currency. Play around with the characters' abilities and get them just according to your preference of combat style. Check out our Best Character Guide to get help choosing a character to play in Bleeding Edge.


Attack the support characters first regardless if there are tanks and warriors like Niddhogr or El Bastardo targeting upon you, focus your fire upon any support character close by. As they can restore the health of the bigger enemies rendering your efforts useless.


Parrying an enemy attack in Bleeding Edge is far superior than evading. This is because evading uses up your stamina, so you can't do it all the time. Parrying on the other hand actually makes you gain stamina instead. Knowing how to perform a parry will enable you to turn the tide of any battle in your favour.

The training area in Bleeding Edge is the Dojo. Take advantage of this feature to hone your combat skills by practicing against AI foes or dummies. The Dojo will also enable you to learn new abilities and refine your timing.

Bleeding Edge is primarily a team game and the key to winning a match is communication. The best way to coordinate with the other members of your team is to use mic and headset to ensure everyone is on the same page regarding combat plans and strategies.

As you play you will earn Credits which is the in-game currency in Bleeding Edge which you can then spend by visiting the Workshop on core cosmetics such as new and customisable hoverboards and emotes.

If you are not happy with the character you have chosen you can change it mid-game in the spawn point after you respawn upon death.

We hope these tips help you out in the game, but for further help, try our beginners guide, we also have some FAQs for Bleeding Edge, you can also submit your own questions there for other players to answer. 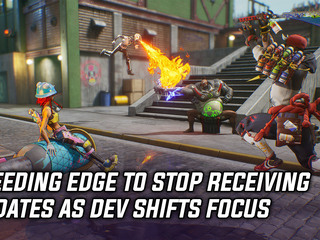 Ninja Theory has announced that their multiplayer melee combat game Bleeding Edge will no longer receive any new updates, in order to focus more on current active games.. Read More

Bleeding Edge Questions & Answers
Our Latest Questions
What is the best strategy in a team battle?
What is better, parrying or evading an enemy att..
How can I practice my characters skills?
See All Questions
Have a question for Bleeding Edge?