Assassin's Creed Valhalla is an open world action-adventure role-playing game tha is the successor to the 2018 game Assassin's Creed Odyssey. Set in 873 AD, the game recounts a fictional story of the Viking invasion of Britain. You control Eivor, a Viking raider who becomes embroiled in the conflict between the Brotherhood of Assassins and the Templar Order. Assassin's Creed Valhalla is available on Xbox One, Xbox Series X/S, PlayStation 4, PlayStation 5, and PC. Take a look at our tips to get help in the game.

Latest updates to our guide:
Where to Find Orlog God Favors
How to get Viking Tattoos
How to get More Leather and Iron Easily
How to Unlock Myth Quests and Reach Asgard
Walkthrough / Guide
Cheat, Tips and Strategy

Fishing in Assassins Creed Valhalla is a side activity Eivor can do using a simple fishing rod which can be found amongst the items of his equipment. You will be able to fish at one of the many fishing spots in game and to do so you just cast the fishing rod and wait a while in order to catch a fish. Once you have one you need to get it ashore which requires constantly monitoring and controlling the tension of the fishing line. If your fishing line gets too stressed it will break and the fish will escape and you will have to repeat the process. Catching and consuming fish is important as it enables you to regenerate health.
Use the d-pad on your controller and zoom (L2) to control your Raven during the objectives that have the 'Locate Area' with a bird icon in the top left of the screen. Your Raven will show a green indicator that will point you in the direction you need to go to find your objective. There will be a green outline around the objective area, press the X button on your controller to mark the spot with your Raven.
To get the Good Catch trophy you are required to catch every type of fish in Assassin's Creed Valhalla with the Fishing Line. Killing the fish with melee or explosives does not count. Fishing is a worthwile activity spending time on because not only does it help you to restore health you will also be able to exchange fish for loot, such as roons once you have built a fishing outpost at your settlement.
It is recommended that as soon as you are able to you build the stables at your settlement and then purchase the horse training. This will enable your horse to swim and increses it's stamina. You will find doing these two things early will be big time savers as you progress through the game.
Assassin's Creed Valhalla puts a lot of emphasis on parries so it is essential that you become proficient at it in order to increase your chances of defeating your foe in combat by being able to stop their incoming attacks.

To parry, press the block button L1 (PlayStation) or LB button (Xbox). When you hold the button you will perform a block, tapping if for a moment will parry the attack. Timing is important when you parry as there is a short time window of about 1 second when the move can be performed. If you hit the parry button as soon as the enemy is starting their attack you will successfully parry the attack most of the time. It is important to remember Perilous Attacks (Red Rune Attacks) cannot be blocked or parried and must instead be dodged.
Early in the story a dialogue choice will appear that determines whether Zealots will hunt you throughout the game or whether they will leave you alone. It is recommended that you choose to have the Zealot Order Members hunt you as it will save you time as they will come to you instead of you having to search for them.
The easiest way to defeat enemies that have unbreakable metal shields is to target their weakspots which are usually the legs or arms. When you aim at an enemy with your bow the weakspot will glow orange. It is recommended that you use the Light Bow because it has the most arrows and is fastest to shoot. You should also consider upgrading your quiver in the 'Inventory' menu to carry more arrows so there is a less chance of running out of them during combat.
To get ths Disorder of the Ancients secret trophy/achievement you must eliminate all targets of the Order of the Ancients. Take a look at the video below which shows all of the Zealots and Order Members.

Take a look at the official gameplay walkthrough which was released by Ubisoft to see the different features in Assassins Creed Valhalla and find out how they each work in the game. 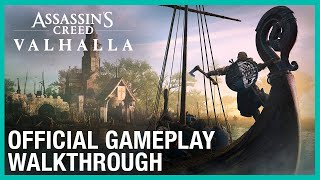 To get the Skadi's Hobby trophy/achievement you must perform a 150m slide in the snow. This must be done in Norway, in the Rygjafylke region. The video below will show you exact location you need to go that will enable you to slide down the required 150m without stopping.

To get the Home Decor trophy/achievement you must place an item on each settlement cosmetic spot. Throughout your settlement there are small highlighted red statues that allow you to place a 'Decorative Element'/item such as for example a well or berserker totem for customization purposes. There are 16 locations and for all of them to appear you must reach Settlement Level 4. You can place the same item at all the locations. It does not have to be a different item for each location.

To get the Overdesign II trophy/achievement you must while on fire during a fight, kill 3 hard difficulty soldiers without breaking their shields. A 'hard difficulty' soldier is one that is several levels above you and has a red skull to the left of their health bar.

In order to accomplish this you need to be at least 40 levels below. The 'Missile Reversal' skill which can be found at the bottom of the skill tree is excellent for dropping the HP of the hard difficulty soldiers. Then set yourself on fire and Kill three in one battle while you're on fire to get the Overdesign II trophy/achievement. Just make sure you land the killing blow while you are on fire.

To get the Row Rage trophy/achievement you must ram and destroy 5 boats in under 2 minutes with your longship. An easy location where this can be performed is in Lincolnshire (England), in the river south of Botolphston. In this location 5 plus boats usually spawn close together. All you need to do is call your longship from the item wheel and select it while near water. Then just open the sails and ram into the 5 small fisher boats.

Your Raven is not as powerful as in Assassin's Creed Odyssey and will not mark enemies, objects, or Order Members. In Assassins Creed Valhalla you will need to press R3 on your controller to do this in a radius around you. This is particularly useful for finding Wealth, Mysteries, and Artifacts because it shows their coloured outline through walls.
In Assassin's Creed: Valhalla there are 68 legendary weapons and armour wealth chests. Legendary Weapons are the best and most powerful weapons and shields in the game, each has a unique name and special perk. Although there are plenty more weapons and armour to collect from other sources like missions and secrets the video below only deals with how to get the Legendary weapons.

In Assassin's Creed Valhalla you can fast travel back to Norway (starting area). In order to do so you must open the World Map when you reach England by pressing the Triangle button (PlayStation) or Y button (Xbox) on your controller. This will give you an 'Atlas' option at the bottom left of the screen. All you simply need to do now is select Norway from the Atlas and you will fast travel there instantly. You will also be able to use this method to fast travel back from Vinland, another area that is unlocked later in the game while going for all Order of Ancients Members. Even after you have completed the story you will still be able to fast travel between areas using this method.
Once you draw the Excalibur Sword from the Stone you will get the secret Caladfwlch trophy/achievement. You will find the Excalibur Sword in Myrddin's Cave in Hamtunscire and to unlock it you must first find 11 Tablets (8 from Treasures of Britain and 3 from Zealots). The following three steps will tell you how you can get this Greatsword and best weapon in Assassins Creed: Valhalla.

Step 2
Obtain a Tablet from 3 specific Zealots - Hrothgar, Woden, and Heike. The Zealots can be found riding on paths in specific areas. A helmet icon will show up on the..
To get the Is There Anybody Out There? Trophy/achievement you must light the unlit braziers on Hadrian's Wall. There are 10 braziers in total to be found in North England along the east side of Hadrian's Wall. Take a look at the video below to see the locations fo all 10 braziers.

To get the Twinkle Twinkls trophy/achievement you need to release a firefly in your settlement. In Assassin's Creed: Valhalla Fireflies spawn at night in the building shown in the video below so it must be nighttime before you attempt this trophy/achievement.

Enter the building, run after the firefly (glowing flying dot), and pick it up by pressing the interaction button (Triangle on PlayStation and Y on Xbox) on your controller. If you caught the firefly it will say '+1 Firefly' on the right side of the screen. Once you have the firefly in your inventory head back to your settlement (Ravensthorpe) and go to the pond with the waterfall which is located to the right of the Seer's hut. If you now walk at the edge of the pond a green prompt will appaer on screen that says ' Relea..
It is important that you remember to restore you health whenever possible as it does not recharge automatically in Assassin's Creed Valhalla. In order to restore your character's health you will need to collect berries from bushes, food from settlements, fish, hunt wildlife, and tale the rations from enemies you kill. You will also be able to restore health by sleeping in your bed.
In order to get the Silent Viking trophy/achievement you must assassinate 10 enemies in a row without triggering a conflict. A good area to attempt this is Haervik Shipyard which can be found in the middle off Rygjafylke in Norway. Here you will find many enemies standing alone. You will not be able to unlock the Silent Viking trophy/achievement with a bow, you need the hidden blade which is obtained during the 'The Prodigal Prince' quest. It is also useful to have the Chain Assassination Skill as this will make it easier. Makes sure between the streak you are not seen by a wolf as this will make you go into a conflict. Also, for this only R1 (PlayStaton) and RB (Xbox) melee takedowns count (bow stealth takedowns don't count).
Assassin's Creed Valhalla Questions & Answers
Our Latest Questions
How to open barred doors
How to get spirit of mari lywd
How to get into Cyne Belle castle?
See All Questions
Have a question for Assassin's Creed Valhalla?
Achievements & Trophies

There are 51 trophies for Assassin's Creed Valhalla on PlayStation 4.

Join us on Discord
Are you an expert in this game? Can you help Assassin's Creed Valhalla players?
Reviews
No reviews listed yet.