Cheats, Tips and Questions for Unsighted

Unsighted is a top-down sci-fi action-adventure game with some puzzle-solving elements that is set in a futuristic world that is ruled by robots that have been blessed with sentience thanks to an energy source called Anima. You play as Alma, an Automaton that awakens to a world in ruin after the war with the humans and who has forgotten her past. Before long, you learn about her struggles and the mission she must undertake to recover some shards before the life force of her friends and herself withers away and turns them and the whole world of Arcadia into mindless killing machines known as the Unsighted. Unsighted is available on PlayStation 4, Xbox One, Switch, and PC. Take a look at our tips to get help in the game. 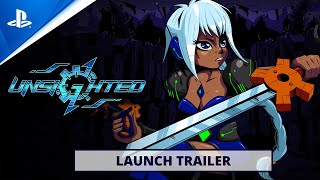 You will be able to find Meteor Dust in chests hidden around the city of Arcadia, and it can be used as a healing item to extend the life of Alma and other characters in the game, so they can keep going. Unsighted has a meter that slowly ticks down with the in-game clock and will result in your character dying if it hits zero. Giving Meteor Dust to an NPC will increase their bond with Alma, which can lead to gifts or even discounts in shops. As Meteor Dust is not easy to find, you need to make sure you choose your friends wisely.
The currency used in Unsighted is bolts, and it is recommended that you don't waste it purchasing weapons, ingredients, or chips as these items can be found anyway by exploring dungeons. Instead, you should save your bolts for purchasing blueprints and upgrading them. There is however a trick you can use that will save you bolts. Bluprints themselves are not needed to create weapons, the pattern can be replicated without them. Simply save the game, make a copy file, put the blueprint in that file, take a screenshot and then return to your main game to create the item. 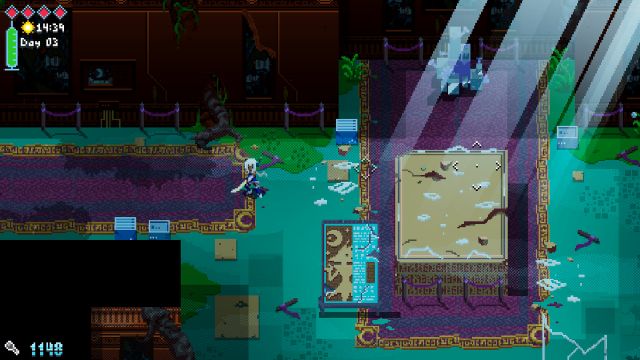 The Best Early Chip
In Unsighted you equip chips to your character instead of weapons and armor like most other action RPGs, each chip is different and boosts a certain stat or grants Alma an ability. One of the best chips to get your hands on early in the game is the Vampire Chip, which will heal a point of health every time you kill three enemies. When you consider that most of the bosses th..
Alma will be able to find a healing syringe in the starting lab area of Unsighted which when used will completely fill her health bar. The healing syringe however has a downside, upon usage it will completely drain, and refills very slowly as you defeat enemies. Since the healing syringe can completely refill all your health, you should only use it as a last resort or when absolutely necessary.
Strewn throughout the world of Arcadia are secret chests that are hidden out of sight. These glowing treasure chests are white and gold and not difficult to spot once they appear on the screen, they tend to be just out of sight which means you will have to find a secret route to reach them. It is beneficial that you take the time to try and find these secret chests as they contain weapons, crafting components, upgrade chips, and blueprints. The secret chests that contain the best items are those that are hidden deepest in the environment.
Scattered around the world of Arcadia aside from treasure chests are breakable crystal caches, these are usually in plain sight and will enable you to get crafting materials if you smash them. Make sure you collect the contents of the crystal caches whenever you see them, as the components you get from them are always needed back in Gear Village to craft new gear and weapons through acquired blueprints.
Your main form of upgrading Alma in Unsighted is through the chips that you typically find hidden in treasure chests or during certain story events. There are different forms of chips, these include health upgrades, stamina enhancements, and damage buffs. As well as finding the chips, you also need to find a terminal in order to access your chips and apply them to a chipset. Whenever you find a terminal, make sure you always equip any new chips you have. You can increase the size of a chip set with the in-game currency you have collected. Terminals also act as respites or save points in the game.
Your stamina meter will deplete, so it is essential that you keep a close eye on it, especially as actions such as attacking, running, and dodging while you are exploring or fighting will all increase the speed it drains. The stamina meter does replenish, but it takes several seconds to recharge, so you need to be continually monitoring it. You will not be able to hack 'n slash in Unsighted, in order to win the tougher battles as Alma you need to be efficient in the way you use your stamina.
When your character dies in Unsighted they will leave behind a small percentage of bolts which you will be able to collect when you respawn by making it back to where you died. Keep an eye out for a chip called the Wallet Chip when you are exploring Arcadia, as having possession of this chip prevents bolts from being lost when your character dies. 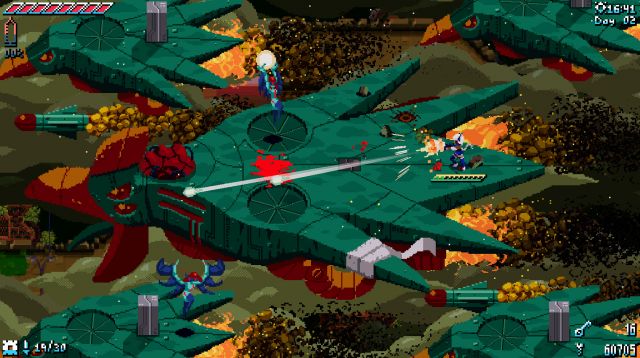 Recharge and Fully Heal at Terminals
Terminals in Unsighted are not only places where you upgrade and equip chips, but also where you can recharge. When you recharge your character, you will completely restore their life. However, it is important to remember that whenever you recharge at a terminal the enemies in that zone will respawn, and you will need to beat them again to pass through the are..
There are three different difficulty modes from which to choose from in Unsighted when you start a new game. These are Explorer, Action Girl, or Robot Apocalypse and are essentially Easy, Normal, and Hard modes respectively. You will automatically be recommended Action Girl mode, but if you are new to Unsighted or have not reached the level where you feel comfortable with the controls you should consider playing the game on Explorer mode which allows for a more relaxed time limit and combat encounters. Even on Explorer mode the game can still be tough, there are though accessibility options on this setting you can utilize to make things even easier if you still struggle.
In Unsighted you have up to thirty pins you can drop on the map to mark different areas. Make sure whenever you come across an area that appears impossible to access, you drop a pin on the map and also take a screenshot in order to remember where this place is for later in the game when you have picked up certain skills or items that will help you access the area. An example of this is the shuriken which is basically a boomerang that you can control to hit switches.
Unsighted Questions & Answers
Our Latest Questions
Do you need blueprints to create weapons?
How many currencies are there in the game?
How many pins do you have for dropping on the ma..
See All Questions
Have a question for Unsighted?