Cheats, Tips and Questions for Tribes Of Midgard

Tribes of Midgard is a co-op, viking themed survival game for up to 10 players. Set in worlds full of dark creatures, hidden gods, and abundant materials to be uncovered, you begin the game as a Viking living in a village that houses the Seed of Yggdrasil, which is the last bastion that protects the gods from the other realms. The objective of the game is to defend your village against the invading Legions of Hel at nightfall and protect the Seed of Yggdrasil from the Giants. Tribes of Midgard is available on PlayStation 4, PlayStation 5, and PC. Take a look at our tips to get help in the game. 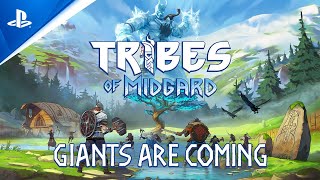 You will receive a warning every few days informing you that the blood moon is rising. This means that the following night Helthings will attack your village, and during the blood moon these enemies will be tougher to defeat. As soon as you see the blood moon warning, you need to return to your village and prepare for the fight. The night after a blood moon enemies will not spawn which means you should take advantage of it to explore far away areas, collect resources, and farm enemies for souls without worrying about being attacked.
In Tribes of Midgard, the NPCs in the village will fight alongside you to fend off the attacks of the Helthings that spawn outside the village. The downside to this though is while the villagers are helping you in battle, they are not at their crafting stations producing useful resources. To make matters worse, if a villager takes too much damage, they will be incapacitated and will need to be revived. It is therefore recommended that you make sure you have everything you need crafted before night falls when the enemies attack, otherwise you will have to wait until the next morning when all the enemies have all been defeated.
Souls are the lifeblood of the seed of Yggdrasil, and they are the most valuable resource in Tribes of Midgard. The souls you gather can be spent at the tree to raise it's health and keep it alive or used to upgrade village NPCs, build and upgrade village defenses like gates and archery towers, building farms, lumberyards, and quarries, and also repairing your weapons. Souls are essential, so don't spend them all in one place, and try not to spend them all. It is recommended that you always keep a couple of hundred souls reserved for emergencies. The only way you will lose the souls you have gathered is if you die out in the world.
In Tribes of Midgard your NPC villagers can be leveled up by feeding them some of the souls you collect. Make the first NPC you level up your tinker, you will find her stationed near the northwest entrance of the village. Once the tinker is Level 3 she will be able to craft items like wood planks, iron ingots, and stone blocks which you can then use to build gates and archery towers to fortify the village. The next NPC you should level up is your blacksmith and armorer, so you have access to better weapons and equipment. Another NPC that needs to level up is the alchemist who is able to craft powerful potions when he reaches higher levels, these include frost protection potions which will become essential when you begin exploring frozen biomes.
It is important that you make upgrading the lumberyard, farm, and quarry a priority, as each of these facilities is necessary for your survival in Saga mode. The lumberyard will automatically generate wood resources, while the quarry will do the same for stone and iron. Upgrading the farm will enable you to get leather and meat, which are two resources that are not easy to obtain during the winter.
Quests get posted periodically at the quest board near the center of the village. Make sure you regularly check to see what quests are available and try to complete them while out adventuring, as doing so will reward you with various resources and items which can then go into village upgrades which will increase your chances of surviving enemy attacks. 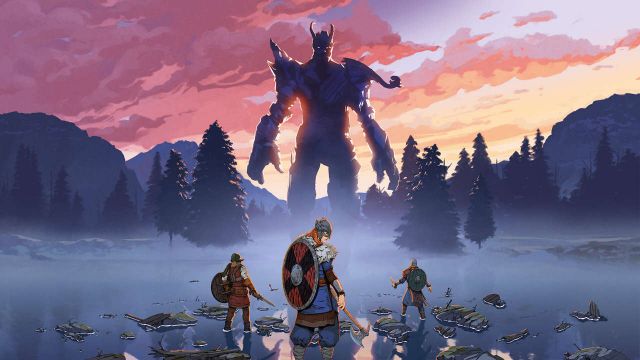 Complete Quests to get Resources for the Village
Scattered throughout the world are shrines, they are represented on the mini-map by small grey stars which turn to gold when activated. Shrines are basically a structure that allows you to fast travel to areas and back to the village. Make sure you activate shrines whenever you come across one while exploring, as they will make getting around the world a lot easier.
Tribes Of Midgard Questions & Answers
Our Latest Questions
What do you get for defeating Fenrir?
How much HP does Fenrir have?
How do you reach Fenrir's lair?
See All Questions
Have a question for Tribes Of Midgard?