Cheats, Tips and Questions for The Riftbreaker

The Riftbreaker is a base-building, survival game with action RPG elements. You play the role of captain Ashley S. Nowak, an elite scientist/commando inside a powerful Mecha-suit capable of dimensional rift travel. Enter a one-way portal to Galatea 37, a distant planet at the far reaches of the Milky Way Galaxy, with the purpose of building up a base that will allow travel back to Earth and further colonization. Hack and slash countless enemies. Build up your base, collect samples and research new inventions to survive. The Riftbreaker is available on PlayStation 5, Xbox Series X, and PC. Take a look at our tips to get help in the game. 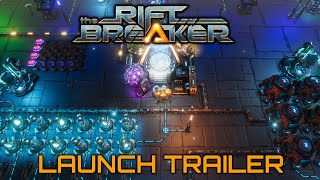 
It is recommended that resist the temptaion to jump into the main campaign and instead start off by playing the prologue. The prologue is an optional feature in The Riftbreaker that acts as a comprehensive tutorial designed to fully explain the complexities and the mechanics of the game so you understand the finer details.


The Riftbreaker features a wide variety of resources you need to continually collect in order to keep your home base stocked and ready for battle. Trying to keep track of all these resources is not easy, but if at any time during the game you want to see what materials you have at your disposal you can do so by opening up the building mode, which will trigger an overlay that will show your main resources. It is crucial that keep track of your resources, as you need materials such as Carbomium Ore to continue building and exploring.


Carbonium Ore is the main crafting component and currency form when you first start out in the Riftbreaker and these deposits are needed to begin building your base. Carbonium Ore is littered all over the map and can be gathered by placing a device called a Carbonium Factory on top of the ore and holding down a button. It is crucial that you gather as much Carbonium Ore as possible, as it is a resource used to build more parts of your base.

Don't be Afraid to Explore


There is a vast world to explore in The Riftbreaker, don't be afraid to venture off the beaten path in your search for resources such as ores. Don't worry if you stray too far and become lost, as the game gives you a useful mini-map as well as a larger map to keep track of your location.


You will be given the ability to build fast travel warp points early on in the prologue, and this is something you should take full advantage of to save time. Providing you have some industry points set up around the map you can connect the fast travel warp points to, you can use them to reach locations almost instantaneously. In order to activate industry points, you simply have to open up your map and choose the location. Many of the objectives in The Riftbreaker lead away from your home base, so always make sure when you build a warp point when you reach new areas. There is no limit to the number of warp points you can build.


Although your mech-suit has plenty of firepower and an array of weapons that includes a rocket launcher and a flamethrower, there is still a possibility you will run out of ammo during enemy encounters when swarms of enemies attack you and your base. To ensure you have an almost limitless supply of ammo at your disposal for your various weapons, it is essential that you build an armory as soon as possible. Once you have built an armory, it will continually add ammo to your inventory.


Nests in The Riftbreaker are fortified enemy camps that you will encounter during your exploration. Make sure you prioritize taking down these nests whenever possible, as doing so will enable you to obtain the rarer minerals, ores, and currencies they hold. Taking down a nest is not an easy task and will require plenty of firepower, the best strategy is to use the weapons in your arsenal that deal damage more efficiently, such as the rocket launcher or flamethrower.