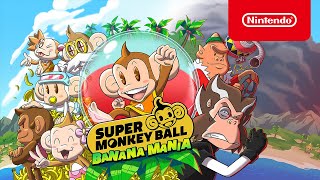 Get your Favorite Characters

How to Unlock Characters


You will find additional characters for sale in Super Monkey Ball: Banana Mania by going to the main menu and selecting the 'Point Shop'. Before you can purchase the characters though, you will need to earn the indicated amount of points by playing the various activities like the Main Game, ranking challenges, and party games. Only the main cast of Monkey Ball characters are playable in the Party Games mode. The crossovers will only be playable in the Main Game and Ranking Challenge modes.

How to get Bananas


The main currency used in Super Monkey Ball: Banana Mania are the bananas you acquire as rewards for completing missions, completing the mini-objectives across every mode in the game, playing mini-games, and picking them up in stages. The bananas picked up in stages are not shown on the map, you must use your own peripheral vision to spot them all.

Some Stages Have Changed


Although Super Monkey Ball: Banana Mania features recreations of 300 stages from older games in the Super Monkey Ball series, you will find that some of the original levels that were harder have now been altered slightly to make them easier. You can however if you wish still unlock and play them in their original difficulty in Original Stage mode. Two stages that have been made easier are Air Hockey and Bonus Wave, which are now both slower.


If you play the party game Monkey Target, you will be doing a lot of flying and landing. The objective of the game is to carefully glide and land on targets with the highest possible points. Make sure when you prepare to land on a targeted platform, you take into consideration the wind speed and wind direction, so you not only hit the target, but also stay on and don't find yourself bouncing off and sinking into the water. Below is a list of the points you can expect to get for landing on the corresponding color


If you are new to the various challenges modes in Super Monkey Ball: Banana Mania and are finding them tricky and frustrating, you can always enable the Helper Function. This feature will double the time allotted for a stage and direct you along a path to reach the goal. Remember though that using the Helper Function will disable your time record for that stage, and you will not earn any points from bananas. The Helper Function is also useful if you are struggling on a stage and just want to play the next one. You can use it to get through and come back later in Story mode.


A jumping feature has been added to Super Monkey Ball: Banana Mania, which was not available in any of the previous games this 20th anniversary remake is based on. In order to jump with your character in the game, you will need to gather 30,000 points by completing stages and missions and then buying the feature in the Points Shop in the main menu. Collecting bananas will also give you one point for each banana grabbed.