Star Wars: Hunters is a free-to-play third person skill-based competitive arena combat game set after the fall of the Galactic Empire. Select from a diverse cast of new characters that includes Bounty Hunters, heroes of the Rebellion and Imperial Stormtroopers, each of which belong to one of three classes: Damage, Support and Tank. Then form a team with three other players to fight for domination against another team in arena confrontations in settings inspired by Star Wars locations. Star Wars: Hunters is available on Nintendo Switch, iOS, and Android. Take a look at our hints and tips to get help in the game. 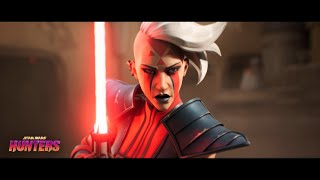 
Below is a collection of hints and tips that will help you to progress in the game. These include how to choose your character and when to use their Ultimate.


There are currently eight hunters available to pick from in Star Wars: Hunters, and they each have unique abilities. These eight characters are Sentinel, Grozz, Imara Vex, Zaina, Aran Tal, Rieve, J-3DI, Utooni, and Sling Shot. Make sure you make your selection based on the hunter that best suits your playstyle. For example, if you like melee characters you may want to consider Grozz or J-3DI wheras if ranged combat is more your thing then a good choice for you would be Sentinel or Imara Vex. Slingshot is your best option if you want a character that is able to absorb a lot of damage from enemies.


Each of the hunters has a specific role, and it is important for the success of your team, you try to fulfill it to the best of your ability. Damage characters are responsible for dealing maximum damage to the enemies. Tank characters are able to absorb damage and complete objectives, while support characters are on hand to protect and heal teammates. If you try and play a role that does not correspond with your hunter, you will be a burden to your team.


Don't turn off auto-fire if you are playing the Android version of Star Wars: Hunters on a mobile device. You are currently unable to customize your controls, which means you will have to aim and shoot with the same finger if you turn off auto-fire and go manual. Until an update is released that allows you to customize the layout of controls, it is recommended that you keep auto-fire switched on.

Shooting at the Enemy


Similar to other shooter games like PUBG Mobile or Call of Duty, it is a good tactic to keep moving when you are shooting in order to dodge bullets and make yourself a harder target for the enemy to hit. Take advantage of your surroundings to make it difficult for enemies to aim at you by staying behind a half cover so that you can shoot enemies easily, and they have difficulty trying to aim at you.

Use the Target Button


Star Wars: Hunters has a target button which is basically a scope-in feature which allows your character to lock in their attacks on an enemy. Regardless of whether you have a melee or ranged character, you need to make sure you take advantage of it to continue attacking the enemy without distraction.

Use Ultimate Abilities at the Right Time


Each of the characters in Star Wars: Hunters has an Ultimate which is capable of changing the outcome of a match when used wisely. The best moment to use the Ultimate is when you can take down all four enemies. It is essential in order to reduce the cooldown of your character's ultimate that you keep collecting the Ultimate power-ups. Listed below are the Ultimates of each character.

Imara Vex - Seeler Salvo
Fire a continuous barrage of missiles which seek enemies you can see.

J-3DI - Whirlwind
Hold your lightsaber out and spin from the waist, damaging all enemies around you.

Rieve - Crushing Will
Use the power of the Force to stun enemies around you, puling them towards you and dealing damage.

Grozz - Boulder Bash
Rip up the ground and throw a boulder which bounces around stunning and damaging enemies.

Sentinel - Empire's Finest
Summon two stormtroopers to follow you and fire at enemies.

Slingshot - Rocket Stomp
Repeatedly jump up and slam down, damaging and slowing enemies around you as you hit the ground.


Star Wars: Hunters is currently only available on Android devices. You can however pre-register to unlock exclusive items and join the Hunters News Network. Sign-up to help unlock a range of special in-game content and receive news updates. All unlocked content will be available in-game when the game launches globally. Click here to pre-register.