Murder Mystery 2 is a horror themed Roblox game where you take up the role of either an Innocent, Sheriff, or Murder. A server holds up to twelve players which is made up of ten Innocents, one Sheriff, and one Murderer. The Innocents who are unarmed and cannot harm the other players must evade the Murderer and use their sleuthing skills to discover who it is. The Sheriff has a gun who is able to take down the Murderer once you have figured out who it is. The Murderer must try and keep their identity concealed and not get shot by the Sheriff as they stealthily find and eliminate the Innocents. Murder Mystery 2 can be played on iPad/iPhone, Android, Mac, and PC. Take a look at our tips to get help in the game.


We have Roblox Murder Mystery 2 codes which you can redeem in this game to claim rewards. Although we have tested all the codes to ensure they work, it is important to remember that some codes do expire over time. It is therefore recommended that you redeem them as soon as possible. Please check back for more codes for this game.

Listed below are the latest working codes for Roblox Murder Mystery 2. Make sure you redeem them before they expire, otherwise you will lose out on picking up the corresponding rewards. If you encounter any codes that have expired, please let us know, so we can remove them from the website. Check back at a later date for more codes for this game, which you will be able to find on this page as soon as they are released.


COMB4T2Tap to copy
- Redeem this code for a free Combat II knife.


Expired Roblox Murder Mystery 2 Codes
Please let us know if you encounter a code in the list above which does not work or has expired, so we can remove it from the list.


Launch the game and go to the 'Inventory' which is in the lower right corner of the screen. Then input your code and click 'Redeem' to claim your reward.

How to get more Codes for Roblox Murder Mystery 2


We publish codes for this game as soon as they are released, so please return to this page another day to get the latest codes and also to check you have not missed any. Codes for Roblox Murder Mystery 2 could be released by the developers on a number of social channels, you can also follow those to stay ahead and grab the codes as soon as we do. Listed below in no particular order are the social channels that we follow in relation to this game:

It is recommended that you visit these social channels anyway, as it is also a great way to get help with the game from other players and stay informed about the latest developments.

The currency in Murder Mystery 2 is coins, and they are used for buying items in the shop, such as effects, weapons (crates), radios, pets, and emotes. There are a possible 40 coins you can collect on a map, (50 if you have purchased the Elite Gamepass). Take a look at the video below to get some tips on how to farm coins to fill your coin bag. These include buying Elite, playing on bigger maps, running loops, and the hide and collect strategy. 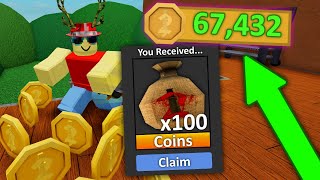 How to Farm Coins
As the Sheriff is the only player in Murder Mystery 2 that has a gun, it is in your best interests to make sure they are always nearby. Doing this will give you some protection and also the opportunity to grab the gun if the Murderer kills the Sheriff. You must be careful about how you stay close to the Sheriff because if the Sheriff thinks you are following them they may suspect you being the Murderer. If the Sheriff dies, you need to be wary about grabbing the gun, as some Murderers will hide in the area and use the gun to lure Innocents to them for an easy kill. If you suspect this, don't attempt getting the gun, just survive the round.
If you are playing either the Sheriff or the Murderer, it is important that you pay attention to where the scanners are on the bank map, as they turn red when you conceal a gun or a knife and touch them. This will result in everybody knowing you are not one of the 10 Innocents which will mean you will now struggle to win the game if you are the killer as you will find it difficult to get close to Innocents and you will be hunted by the Sheriff who will now shoot whenever he sees you.
If you are playing as an Innocent, a good strategy is to stay near to people, but at the same time don't be too close to them. You want to place yourself in a position where if you see the Murderer take out their weapon, there is enough space between you and the Murderer's intended victim to escape and find the Sheriff to tell them who the Murderer is and the location where the attempted murder is happening.
If you are playing the role of the Sheriff it is essential that you are alert at all times and trust nobody as the Murderer will be trying to kill you before their identity is revealed. Make sure you pay attention to the people and your surroundings for any clues as to who the killer is. Keep your gun hidden so the other players and the killer don't know you are the Sheriff. Stay near to groups, but don't allow them to get too close. Only take out your gun to shoot if the person coming towards you has a knife, if they are not wielding a knife then run away from them. If you witness a murder taking place now is the time to draw your gun. While shooting at the killer, try and remember as many details about their appearance as you can just in case you miss, and they get away.
If you are playing the role of the killer in Murder Mystery 2 you will be a much more deadly slayer if you know how to throw the knife. This will enable you to get kills from a further range and also help you combat the Sheriff who will be hunting you down with a gun if your identity has been revealed.

- Computer
If you are playing Murder Mystery 2 on computer, you first need to take the knife out by pressing the '1' key. Then press the 'Shift' key to lock your camera and bring up a crosshair on your screen to aim your throw. Once your target is in the crosshairs, press the 'E' key to throw the knife for the kill.

- Mobile Phone
If you are the killer and using a mobile device, you just need to press the big 'Throw' button on your screen to throw the knife at your victim when they are in the crosshairs.

- Console
If you are playing Murder Mystery 2 on a console, you just need to draw out the knife and press the Left trigger on your controller. When you do this, you will throw the knife at wherever you aimed your crosshairs on.
If you are playing the Murderer, it is crucial that you keep the knife concealed, so the other players do not know you are the killer. The Sheriff now knowing you are the killer will put you in a safer position, as you will not have to worry about being shot as you look to lure him to his death. Trying to get close to the Sheriff to perform a melee attack is risky, a good strategy to eliminate him without revealing your identity is to hug the walls and peek out briefly to throw the knife, doing this will also help you not to get shot if the Sheriff sees you. Remember though that getting a throwing knife kill will get you far fewer points than getting a melee one. The choice is yours, getting rid of the Sheriff though will make taking down the Innocents a lot easier. 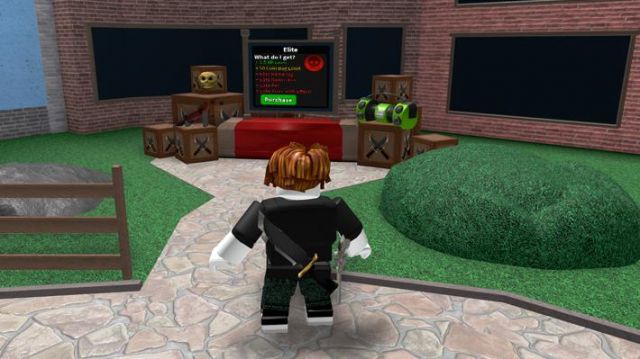 How to Kill the Sheriff
If you are playing the killer, it is essential that you discreetly explore the map, so you know exactly where the various exits and hideaways are located. The key to being successful in this game as the killer is to kill secretly without being seen, so knowing beforehand where the nooks and crannies are where you can lure your victims to kill them unobserved will help you immensely. Always kill someone quickly, and it is important that you immediately put the knife away when the deed is done.
Roblox Murder Mystery 2 Questions & Answers
Our Latest Questions
How to cheat for coins
Why can't I shoot when I am on bluetooth with my..
How do you become murderer every time?
See All Questions
Have a question for Roblox Murder Mystery 2?

Join us on Discord
Are you an expert in this game? Can you help Roblox Murder Mystery 2 players?
Reviews
No reviews listed yet.