Override 2: Super Mech League is a robot brawler game that has a roster of 20 original mechs to choose from, each with a unique fighting style and special ablilities. Climb the ranks in Override 2' all-new Career mode, Leagues, or play with friends in a variety of game modes including 1v1, 2v2, Control, and Xenoswarm. Override 2: Super Mech League is available on PlayStation 4, PlayStation 5, Xbox One, Xbox Series X, Switch, and PC. Take a look at our tips to get help in the game. 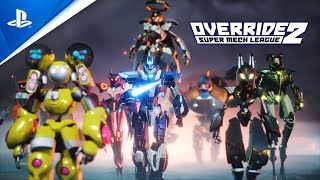 At the start of League mode you will be randomly assigned a squad of mechs and in order to get the most out of it you should teach yourself how to play a few of the mechs instead of sticking to one favourite. Diversifying yourself with the different mechs is worthwhile doing because even when you have brought your own mechs there may be occasions where you will still need to mix it up to fulfill a sponsorship contract.
Unlike the first game there is no heat guage in Override 2: Super Mech League so you no longer need to charge your moves or worry about burning up. This means once you get a feel for how quickly your four main attacks come out you will be able to continuously use them to hit the enemy hard and fast at all times.
In Override 2: Super Mech League there are three clubs you can join: Magma, Pacifica, and Starlight. These clubs all function the same and you can join any of them. You will be able to join a club in Override 2: Super Mech League after you have reached veteran status which is accomplished by winning enough matches to get C grade in multiple leagues. Once you achieve this you will receive an offer to join up with one of the clubs. Each of the clubs has it's own influence meter that rises based on how many matches the club's members win or lose and each member will recieve varying cash prizes at the end of the week depending on how high the influence meter is and can be anything from a few hundred to a 5,000 payout if the meter is maxed out at 1,000.
To secure a little financial aid from one of the league's numerous sponsors you need to play League mode until your manager, Zoe, informs you that you have been approached for a sponsorship deal. You can either choose to accept or reject the sponsorship deal, if you accept it you will will first have to complete an attached challenge in order to recieve your paycheck. These challenges tend to be straight forward and can be completed over the course of multiple fights, they do however have a time limit which you will need to keep an eye on. Failing to complete a challenge will not result in any major penalty. Challenges can be anything from performing X number of grab attacks to blocking X number of attacks.
In Override 2: Super Mech League you do not have to charge your attacks so you can string your attacks into combos. In order to find out which moves best combo into each other it is important that you spend time in Training mode to determine which moves connect. It is essential that you take the time to do this as your move list will only tell you how to perform the specials.
In order to customize your mech in Override 2: Super Mech League, you will need to gain access to the mech Garage. To do this you need to play League mode until your manager, Zoe, informs you that it's time for you to get your own mech and start making a name for yourself. Once you have access to the garage you will be able to purchase your own mech for 1,000 coins, if you do not have the cash to do this you will have to win some more matches, or clear a Sponsorship. Every mech features multi-colored armor sets you can buy with coins. Armor can be placed on the torso, both arms, and both legs. Accessories can also be added to make your mech look more unique.
Override 2: Super Mech League Questions & Answers
Have a question for Override 2: Super Mech League?
Achievements & Trophies

There are 36 trophies for Override 2: Super Mech League on PlayStation 4.