Cheats, Tips and Questions for Othercide

Othercide is a Gothic horror turn-based strategy game where with the help of the mysterious figure called the Red Mother you summon female warriors calledd Daughters - echoes of whatever the Mother used to be to fight against the nightmarish Suffering in a dimension known as the Dark Corner. Othercide is available on Playstation 4, Xbox One, Switch, and PC. Take a look at our tips to get help in the game.

In Othercide Daughers do not heal between missions and you will not find any healing abilities or items. The only way you will be able to heal a Daughter back to full health is by sacrificing antoher Daughter that's at an equal or higher level. The class does not matter. When a Daughter is sacrificed the healed character will carry a part of the sacrificed daughter with them always in the form of a small mechanical bonus based on her stats at the time of death. Having a supply of sacrifices is rarely an issue, as the Vitae needed to summon new daughters is handed out in abundance.
In Othercide there are 5 chapters or 'eras' and each one has 7 'days'. During each of these days you are required to complete at least one mission in order to progress to the next. It is recommended that if possible you avoid Rescue missions as these are the most brutal ones in the game. The objective of these missions is to bring the VIP (aka the Bright Soul) to the evac point and escape with your squad. Select the Hunt missions instead, these tend to be more straight forward and manageable. Hunt missions begin with only a few enemies but within a turn or so, more will spawn and you will need to adjust your strategy accordingly. You will be able to battle the chapter's boss as early as Day 4 and once you reach Day 7 there will be no more missions, only the boss fight. 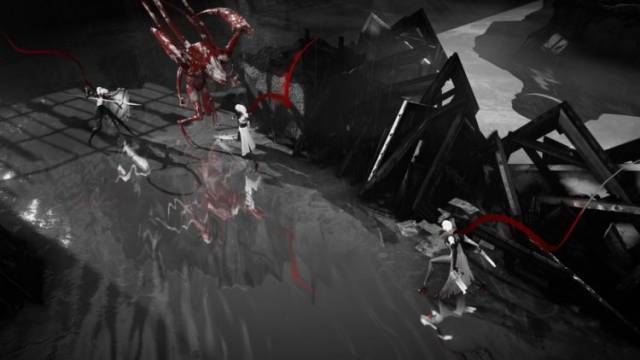 Era Missions and Bosses
If you are struggling to defeat a boss in Othercide you should consider investing in Reaction skills. Your Daughters will have access to 5 different skills which are split into different categories. One of them is called a Reaction skill and they activate whenever your allies or enemies perform a certain action. The biggest benefit of using Reaction skills is unlike Active skills which are charged or instant abilities they do not cost a lot of AP and enable you to play more defensively. Some of the effects Reaction skills can cause are interrupting an enemy's attack or action, damaging a hostile that's being targeted by a teammate, immediately damaging an opponent that moves in melee range, and swapping places with a teammate before they get attacked.
In Othercide all of your units start off with 100 AP and each action you perfrom on the battlefield, either moving or attacking costs AP. Once a unit goes below 50 AP they will enter Burst mode where you you will be able to enact more actions during your turn at the consequence of your units next turn being delayed in the timeline. Don't be afraid of going below 50 AP, especially if doing so gives you the opportunity to kill several dangerous enemies by consecutive attacks, there are no immediate threats, or your Daughters can use their 'reaction' skills to help defend a teammate.
In order to be successful in Othercide it is essential that you understand how the game's Dynamic Timeline System works as this is where you are able to speed up your forces, slow down enemies, place traps, hazards, and exclusion zones to trigger at specific times. It is also important that you understand the concept called 'Initiative' as it determines how early a unit can act in the timeline, this is partly based on how much AP (action points) you spend. Moving your units and enemies around the timeline is a powerful ability that gives you the first strike and follow-ups at key moments. 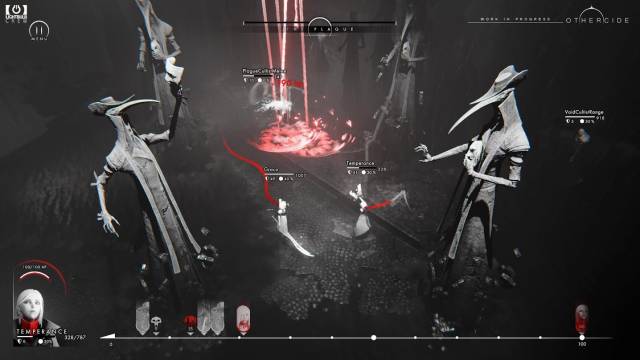 Understand how the Dynamic Timeline System works
As you progress through Othercide you will obtain 'Memories' whenever you kill certain enemies. Memories are basically skill mods that you can assign to your Daughter's to give them an effect such as increase damage, cause armour penetration, or impact the timeline. Slotting memories in a skill slot costs vitae which is the gold your earn from missions and the same resource used to recruit new Daughters. Every Memory unlocks a new entry in the Memories section of the codex. Each skill can only have one assigned Memory.

Below is a list of the different Memories, their effect, and their requirement to unlock them.

Damaged Left Eyeball
Effect: Start a run with 2 memories
Cost: 0 vitae
Unlock Requirement: Finish the first mission; can be activated at no cost during your current playthrough.