New Super Mario Bros. U Deluxe is a 2.5D side-scrolling game. Princess Peach is held captive in her castle by Bowser, Bowser Jr., and the Koopalings who invade and use a giant mechanical arm to throw Mario, Luigi, and two Toads far away. Mario and friends must now travel across this new land returning to Peach's castle in order to save her. New Super Mario Bros. U Deluxe is exclusively available on the Nintendo Switch. Take a look at our tips to get help in the game. 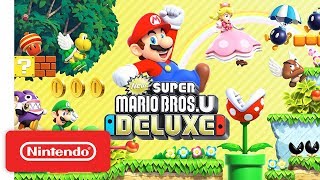 Complete video guide to getting all the big star coins on New Super Mario Bros Wii. We take you through each individual level showing you exactly ho..

You will earn special rewards whenever you jump on the flagpole to complete a level and the last two digits on the timer match; 11, 22, 33, etc. For each number you will be rewarded with an item and a fireworks show. The amount of fireworks increases as the matching digits go higher, all the way up to 99.

Last Digits Equal 55:
Get an Ice Flower and 5 fireworks.

Last Digits Equal 66:
Get a Tiny Mushroom and 6 fireworks.

Last Digits Equal 77:
Get a Super Acorn and 7 fireworks.

Last Digits Equal 88 or 99:
Get a S..
Fireworks will appear and Toad will also give you an item whenever you complete a level and the last 2 digits of the timer match (excluding 00). Listed below are the items that are unlocked by matching their timer digits.

Star:
Last 2 digits equalling 88 or 99
When you complete the final stage in New Super Luigi you you will unlock a special 'M' block that appears at the start of every stage. If you then hit this block while playing as Luigi you will be able to control and move like Mario from Super Mario Bros. U. This change will remain until you exit the current stage.
Make a point of entering every Warp Pipe you come across. Not every pipe conceals a secret but you will discover that many of them do, especially if they are heavily guarded by enemies or obstacles.
To play as Nabbit on any stage in single player you need to hold down ZL when selecting a stage. When you do this Nabbit will replace Luigi for that stage. Luigi will return when you have completed the stage or if Nabbit dies in the stage.
Stars will be added on your save file when you complete certain tasks. Getting ALL 5 stars will enable you to revisit deactivated Toad Houses infinitely.

5 Stars:
Capture ALL 7 Nabbits, and get every star coin in Superstar Road Level 9.
'M' blocks will appear at the start of every Luigi level once you have beaten the final stage in Super Luigi U. Hitting this block makes Luigi play exactly like Mario for the remainder of the stage.
If you are new to New Super Mario Bros. U Deluxe and unsure which are the best characters for you to use to get familiar with the game you may want to consider Nabbit and Toadette. Nabbit is a sticky-fingered thief who is particularly adept at sneaking past bad guys to snag items and Toadette with the help of a Super Crown can magically transform into Peachette who has the ability to double-jump, float slowly during free fall, and get a boost back up if she falls into a pit. Both are great characters for new and less-experienced players.
Depending on the dregree of completion of the main story you can earn up to 5 stars on your save file.

2 Stars:
Unlock and beat every level outside of Superstar Road.

3 Stars:
Get every star coin outside of Superstar Road.

4 Stars:
Get every star coin in the first 8 levels of Superstar Road to unlock the last level.

5 Stars:
Catch 7 Nabbits (1 from each world except Peach's Castle and Superstar Road) and get every star coin in Superstar Road-9.
Once you manage to complete World 8 in New Super Mario Bros. U Deluxe you will unlock the bonus world 9 which is the Superstar World that also includes the Secret Island which you will be able to find between Sparkling Waters and Acorn Plains.

To unlock each individual level in Superstar World you will need to collect the required number of Star Coins. The Secret Island features the Records Toad House which will enable you to see how many coins you have collected and your personal best records whilst playing the game.
Once you have earned ALL 5 stars on your profile you will be able to visit Toad Houses repeatedly without them becoming inactive (previously inactive Toad Houses will become accessible again).
Hit blocks, especially if you notice they are out of the way or appear unusual as there is the possibility you will find a hidden Vine that will take you to a secret area. Make sure though that you do not break blocks that you need to reach high up areas.
Blue Toad is a playable character in New Super Luigi you and is able to perform a scuttle jump much like Luigi and the other playable characters. To unlock Blue Toad as a playable character you must highligt Blue Toad at the 'Select' screen and then hold down the L or ZL trigger buttons to change their color to Blue. Press A to confirm. Just repeat the process to revert Blue Toad back to Yellow.
Once you have completed World 8 a bonus world with more difficult levels will become unlocked. Completing World 8 will also unlock the Secret Island, located between Acorn Plains and Sparkling Waters.
When you complete Story mode 'Quick Save' will be replaced with 'Save' on the 'Start' menu for the Overworld. You will now be able to save at any time from the Overworld, not just after finishing important levels.
On the 'Title' screen, push and hold in the Left Stick and press L and R. If you have entered the code correctly you will hear Nabbit laugh as confirmation. The code works for each game mode.
Using the secret single player Nabbit code on the final Star Road level will enable you to play as your Mii instead of Nabbit.
There will be some hidden stages that you will not be able to access unless you have obtained all the Star Coins in the game so it is worth it to go out of your way to collect them.
Fireworks will appear if you touch the flagpole at the end of the level and the last 2 digits match. The number of fireworks depends on the last 2 digits, 11 is 1 firework, 22 is 2 fireworks and so forth.
Unlike previous Mario games it is worth the effort to collect coins in New Super Mario Bros. U Deluxe as you can now get 1-Up extra lives every time you obtain 100 coins throughout the stages. There are plenty of hidden areas and caverns that contain coins, and giant Star Coins that can be used to unlock secret courses later in the game. You will be able to find 3 Star Coins in every level. It is not necessary to go out of your way to collect coins but make sure you pick up those that are in front of you as you will need those extra lives they reward you with later in the game.
When selecting a character highlight Yellow Toad and hold L or ZL. As you hold L or ZL Yellow Toad will changed colour and become Blue and you will be able to play as Blue Toad. To make him revert to Yellow Toad again hold L or ZL on Blue Toad and press A to select Yellow Toad.
Keep an eye out for any large cliffs or what looks like solid blocks of land that take up a lot of space on the screen. You will discover that these areas tend to have hidden caverns concealed beneath them that are full of coins. You can usually get into these by finding a secret entrance in the side of a hill or cliff that appears solid but melts away if you jump into it.
In New Super Mario Bros. U Deluxe you can get stars on your save file by completing certain tasks. If you manage to collect all five stars you will be allowed to revisit deactivated Toad Houses infinitely. Listed below are the requirements for getting all five stars.

5 Stars:
Capture all 7 Nabbits, and get every Star Coin in Superstar Road Level 9.
When you have completed the game once Superstar Road will become unlocked. The Propeller Hat and Penguin Suit power-ups that appeared in New Super Mario Bros. Wii will become available at the Toad Houses that are located there. Once obtained the Propeller Hat and Penguin Suit power ups can be used in any level in the game.
Once you have beaten the last stage a red block with the letter 'M' on it will appear at the start of every stage. Hitting it makes Luigi's movement physics the same as Mario's were in the New Super Mario Bros U. This does not affect Nabbit. This effect will last until you exit the stage. You will not be penalised when using the block.
'M' blocks will appear at the start of every Luigi level once you have beaten the final stage in Super Luigi U. Hitting this block makes Luigi play exactly like Mario for the remainder of the stage.
New Super Mario Bros. U Deluxe Questions & Answers
Our Latest Questions
I have all the satr coins in the first level, ho..
How do get Infinite Health?
See All Questions
Have a question for New Super Mario Bros. U Deluxe?

Join us on Discord
Are you an expert in this game? Can you help New Super Mario Bros. U Deluxe players?
Reviews
No reviews listed yet.