NBA 2K21 is a basketball simulation game that is the 22nd installment in the NBA 2K franchise and the successor to NBA 2K20. With extensive improvements upon its best-in-class graphics and gameplay, competitive and community online features, and deep, varied game modes, NBA 2K21 offers one-of-a-kind immersion into all facets of NBA basketball and culture - where Everything is Game. NBA 2K21 is available on PlayStation 4, PlayStation 5, Xbox One, Xbox Series X, and PC. Take a look at our tips to get help in the game. 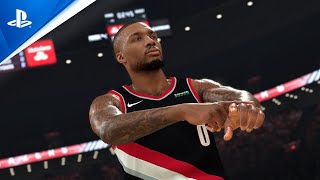 NBA 2K21 'Everything is Game' Trailer

The easiest and quickest way to earn Progress Points in NBA 2K21 is to play the 'Free Throw Golf Drill' which is unlocked by playing MyCareer. Once you have unlocked the 'Free Throw Golf' drill, play it as often as you can. This is the easiest drill in the game, and it will enable you to earn at least 3000 progress points for your Shooting Badges. If there's a Legend in attendance you will get 3x the Badge progression which basically means you can gain 9000 Progress Points with four 'Free Throw Golf' drills which will take approximately 5-6 minutes to complete.
Try to avoid shooting when you are being heavily guarded by your opponent because in NBA 2K21 you will more likely find your possession taken away, and your shots intercepted compared to previous versions of the game. When you have an opposing player hanging all over you try to sniff out some open space, so you can get away from the defender and set yourself up to attempt your shot without being impeded.
The key to improving your game in MyCareer is VC (Virtual Currency) as this is used to purchase all stat upgrades. Therefore, it is essential you have a good source of it in order to get better. The best way to earn VC consistently is to play MyCareer games as they will enable you to earn a salary for each game you play plus you can get incentive from sponsorships when you complete certain challenges. Keep an eye on these challenges and pick the ones that you can complete easily. You will be able to get 1000 VC for about 30 minutes of gameplay once you reach the All-Star level.
To perform well in MyTeam you will need to collect the top players and one of the ways they can be obtained is by opening packs. By getting Locker Codes you can collect packs without spending any real-life money. Most Locker codes expire since they tend to be seasonal, so you need to input them as soon as you get them. You can keep track of the latest Locker Codes by following NBA 2K21's official MyTEAM and NBA 2K Twitter accounts.

Redeeming a Locker code in NBA 2K21 is a simple procedure which is performed by following these steps:

- Launch NBA 2K21 on your preferred platform for gaming.

- Navigate to 'MyTEAM' a..
If you decide to play NBA 2K21 using the new shooting feature you need to learn whereabouts on the court the Hot Zones are for your favorite players. When your player shoots from their hot zone they will receive a boost which will result in making the basket easier. This means you will need to practice with your players, so you can figure out where their Hot Zones are on the court in order to make their shots more consistent during a game. A good place to do this is in Practice mode.
When you play a team that has a good offensive athlete in their ranks you need to make sure you stay close to them at all times, so you deny them the space they need to make a shot. Stand your ground whenever you think they will attempt a shot to make it more difficult for them to get the layup or dunk off you.

To stand your ground in NBA 2K21 you hold Circle/B on your controller, this will make your player plant their feet and if the opposition then runs and knocks you over while attempting to layup or dunk they will likely make an offensive foul which will result in possession being given back to you.
If you are struggling to get to grips with the new shooting system you can turn off the shot meter in the settings to gain a bit more control and revert to an experience that is more in-line with previous versions of the game. If you decide to do this you need to release the shot button or Pro Stick at the height of your jump in order to give yourself the best chance when you line up an attempt to shoot at the basket.
The key to having a successful team in MyCareer is making sure you pick the players that suit your playstyle. Choosing your build is the first and most important decision you will have to make in NBA 2K21 so make sure you get it right. Ultimately the build you choose should be one that you will feel happy playing with, if for example you like attacking the rim and dunking it makes no sense putting together a Sharpshooting build. Remember also that you are in for a long grind to get the required VC (Virtual Currency) to reach a high 'Overall' so make sure you put a build together that is going to be effective when playing Rec and Pro-Am. To get from 60-85 Overall takes approximately 170,000 VC which is going to take some time if you do not intend on using real money to buy VC.
Although grinding in MyCareer and The Neighborhood are the two best ways of getting VC (Virtual Currecy) there are several other ways you can earn it in NBA 2K21 without spending real money to buy it. You can earn VC by answering questions correctly during episodes of 2KTV, earning endorsements, completing shooting challenges at MyCourt, and using your Daily Spin in Jeff's Arcade.
Before you can play an NBA game you will have to complete the introduction which includes a few college games. It does not matter which college you pick but what is important is that you perform well in order to earn a decent salary in your rookie contract. To earn the maximum possible salary you need to be at least the second overall pick in the draft which can only be achieved by winning games, getting a high teammate grade, and completing all the challenges given to you by a reporter. You will also have to choose an agent, the choice is Harper Dell or Archie Baldwin. Pick Dell if you want to get a big sponsorship quickly or Baldwin if you want to grind and get better deals later in the game. It is crucial that you perform in the Introduction/Pre-Draft because the games, drills, and de..
In NBA 2K21 Badges are earned in MyCareer based on how you play, who you hang out with, and how good your regular attributes are. To be successful on the court it is important that you know your player's badges and understand how it applies to their play style so when you level up in MyPlayer you are able to pick the correct Badge for your player in order to make them stand out.

Earning Badges in NBA 2K21 is a grind that cannot be avoided, but there are some things you can do to make the process easier. Aim to get as good a teammate grade as possible, because the higher your team's chemistry is, the better you perform, and the faster you will earn badges. Also try to partake in Training and the gym as often as possible, so you find your player's Hot Zones on the court. If you..
Shooting baskets is different in NBA 2K21 from previous versions of the game. Instead of the green meter you now have to time your shots and release the Pro Stick or shoot button at different times which will depend on where you are in the court. Therefore, to become proficient at shooting using this new feature it is essential that you learn the court and get to know how it feels to shoot from different positions on it. Remember, in NBA 2K21 every shot you take will be different.
NBA 2K21 Questions & Answers
Our Latest Questions
In 2nd year of my league and have the same rooki..
What are the best dribbling moves to master firs..
What is the best Badge for short players?
See All Questions
Have a question for NBA 2K21?

Join us on Discord
Are you an expert in this game? Can you help NBA 2K21 players?
Reviews
No reviews listed yet.