Cheats, Tips and Questions for Judgement

Judgement is an action-adventure game that is a spin-off to the Yakuza series. The game follows lawyer-turned-detective Takayuki Yagami as he and his allies explore a case involving corpses whose eyes have been removed. Set in fictional the fictional district of Kamurocho ou play the role of Yagami and must fight thugs and Yakuza while carrying out side missions which involve chasing, stealth and searching for clues. 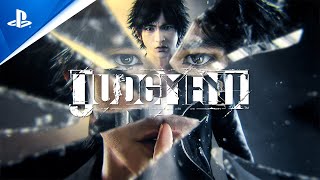 Getting involved in fights with thugs on the streets of Kamuroucho will frequently happen as part of the storyline, and you have the option to either engage them or run away. It is however more beneficial to fight these thugs whenever they attack you as it will earn you SP which you will need to unlock skills and cash which you will need for bribes or at shops.

Just make sure you finish these fights as fast as possible, collect your reward and then move on as there are plenty of other things you could be doing instead. The quickest way in which to finish these random street fights is to use your EX abilities in order to deal some extra damage.
If you have a Yakuza save file on your console you can check your mailbox outside your office and receive 50,000 JPY free. This is particularly useful when you start the game as getting hold of money early in Judgement is not easy. If you have not played Yakuza previously the easiest way in which you can get your hands on money is to take on the Side Cases that open up along the course of the game. These Side Cases are worthwhile doing as they reward a decent amount of currency and require little effort.
The Side Cases in Judgement are optional missions you can undertake that will not only give you extra insight into the world but also give you opportunities to earn a sizeable amount of yen as rewards. There are however several Side Cases that that can only be found after reaching certain parts of the story and in some cases only once you have reached a certain level of City Reputation.

You can increase your City Reputation in Judgement either by completing a given task from a friendly (which will increase your reputation meter by one) or by completing the tasks the bartender at Bar Tender gives you. There are four different ways in which you can find Side Cases in Judgement, these are at YagamiĂ˘Â?Â?s Detective Agency, the Genda Law Office, Bar Tender, and scattered throughout the city itself.
In Judgement you will often be fighting when you least expect it, so it is essential to help ward off a brutal unexpected beatdowns you make sure you are always stocked up with recovery items. Early in the game this means visiting the Poppo Convenience stores that are on your map and grabbing as many Toughness Bottles and Stamina items as possible. You may also want to stock up on Sushi Sets as it is possible to carry 10 of these as opposed to just three Toughness Bottles. Whenever a character asks you during a Story Mission if you are 'ready' to go somewhere, that pretty much guarantees you are about to enter a troubled situation and you need to go in prepared for a lot of fighting.
In order to unlock new skills for Yagami requires SP points which can be earned during the game doing things like solving cases, playing in arcades, beating up thugs, and even taking pictures of cats. To find out if you have enough SP points to unlock a new skill you simply need to check Yagami's phone periodically to see if you have received a notification with a number. The numbers next to the skill categories tell you how many skills you can currently afford.

There are three different categories of skills you can unlock in Judgement, these are Ability, Battle, and Special. Abilitiy skills raise Yagami's base stats like health and how much alcohol he can drink. Battle skills unlock new moves for Yagami to use in fights. Special skills cover everything else from lockpicking to tailing.

When it comes to which skills you should get first it is recommended that you resist the temptation to get on the Battle skills and instead focus on the skills under the Special category such as Silent Destroyer, Invisible Man, and Target Locked as they will help make lengthy tailing investigations considerably easier. Another useful skill you should consider getting as soon as possible is also under the Special category, and it is the Detective's Hunch skill which will make your controller vibrate whenever you hover over a clue when searching a crime scene.
An easy way in which you can get a decent number of Skill points early in the game is to head to the Poppo stores and make purchases. All you need to do is speak to the store clerk who will inform you that you will gain Loyalty points when you spend a certain amount of money in the store. Once you have accumulated 10 Loyalty points you will be rewarded with 500 Skill points.
Healing in Judgement is similar to the Yakuz series of games in that it is accomplished through the consumption of items. This basically means dropping by restaurants and the Poppos convenience stores around Kamurocho when you are out and about to purchase food items in order to replenish health. Mortal wounds in Judgement however can only be healed through the use of Med Kits or by visiting the doctor. Although Med kits are costly they are more efficient than food and can only be purchased from the underground Moroboshi Clinic for 20,000 JPY.
Although the entire city is available to you as soon as you begin playing Judgement you will discover that not every character or location will be accessible from the start. These things will eventually become unlocked as you progress in the game and are sent all over the city over the course of it's story. It will be many hours into the game before the secret casino becomes unlocked in Chapter 8: A Broken Bond when you find it in the Champion District after being told it's whereabouts by the woman in purple you played poker with in L'Amant.
Judgement Questions & Answers
Our Latest Questions
WhatĂ˘â‚¬â„˘s the code for any/all the safes in ..
Where do you get Gold Tuna Cat Food?
Where do you get Old Circuit?
See All Questions
Have a question for Judgement?

Join us on Discord
Are you an expert in this game? Can you help Judgement players?
Reviews
No reviews listed yet.