Immortals Fenyx Rising is a comedy action-adventure video game based on Greek mythology played from a third-person perspective in an open world. After spending eons imprisoned under a mountain by Zeus, Typhon manages to escape and takes his revenge on the Olympian gods, severing them from their godly essences and robbing them of their powers. You play as Fenyx,a winged demigod, on a quest to save the Greek gods and defeat Typhon. Immortals Fenyx Rising is available on PlayStation 4, PlayStation 5, Xbox Series X, Xbox One, Nintendo Switch, and PC. Take a look at our tips to get help in the game. 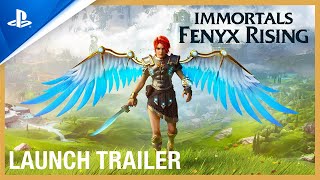 Scattered throughout the world of Immortals Fenyx Rising are hidden quests which are designed to encourage you to explore the world. You will not be able to find these quests using Far Sight and they will not appear on your map until you activate them. Once you have activated a hidden quest a marker will appear on your map to help you complete them so you can claim their rewards.
Make sure you thoroughly search the starting area of Immortals Fenyx Rising. This small area is called the Clashing Rocks and although it does not appear interesting it should not be overlooked as it contains a high number of valuable Epic Chests. You will be able to easily identify these chests as they will have a helmet icon next to them. Take the time to look for these chests and solve their corresponding puzzle to pick them up as later in the game they will enable you to upgrade your armour.
Once you have completed Immortals Fenyx Rising a new difficulty setting will become available called Nightmare mode which increases considerably the difficulty of the game. It does this by increasing the strength of the the enemies and taking away health regeneration outside of combat. If you start Nightmare mode on a New Game plus save you will retain all your abilities and gear.
After a while of taking in all the sights you will want to quickly do the quests so you can upgrade your gear and the way to do that in Immortals Fenyx Rising is by fast traveling. You can fast travel to any location or landmarks on the map you have already been to and this is done by oppening your map, moving to the location you want to fast travel to and holding down the Fast Travel button. Chest and ambrosia locations, along with other item objectives are not available for Fast Travel. You will find being able to Fast Travel to the Hall of Heroes particularly useful as you will need to got there often.
Try to complete the Heroes challenges whenever they are available at the Hall of Heroes as they will give you great rewards in return for completing fairly simple tasks. The Hero Challenges you see on the left of the screen are built-in, offline challenges while the ones on the right side are online challenges with a limited time to complete.
It is essential that you regularly return to the Hall of Heroes as this acts as your hub and is also the place where you will strengthen Fenyx by taking the rewards you earned from questing and solving puzzles and using them to get upgrades and unlock useful things that will help you during the game.
Resist the temptation of just doing the main quests in Immortals Fenyx Rising and ignoring everything else the game has to offer. The main quests can be easily identified by their big quest markers and they will connect you to other main quests when you complete them. It is more beneficial instead to spend time exploring the different content in the game in order to strengthen Fenyx to make the game easier.
Immortals Fenyx Rising has a new game plus mode which becomes unlocked once you have completed the game. In New Game Plus you begin the adventure again retaining nearly everything you earned from the completed game, this includes godly powers, health and stamina upgrades, electrum, weapons, armour, wings, and skins. However, in New Game Plus the map is fogged again, challenges and vaults will need to be re-done, and Hermes' task board will start again.
Immortals Fenyx Rising Questions & Answers
Our Latest Questions
Unfog whole map
See All Questions
Have a question for Immortals Fenyx Rising?
Achievements & Trophies

There are 51 trophies for Immortals Fenyx Rising on PlayStation 4.

Join us on Discord
Are you an expert in this game? Can you help Immortals Fenyx Rising players?
Reviews
No reviews listed yet.