Guilty Gear Strive is a hybrid 2D/3D cell-shaded graphics fighting game that is the latest installment in the Guilty Gear series. It introduces the 'Wall Break' feature, which allows for stage transitions when a combo is initiated in the corner of the arena. The story continues after the events of Guilty Gear Xrd and is the conclusion of Sol Badguy's story, set in the United States of America and featuring his final confrontation with That Man, Asuka R. Kreutz. Guilty Gear Strive is available on PlayStation 4, PlayStation 5, and PC. Take a look at our tips to get help in the game. 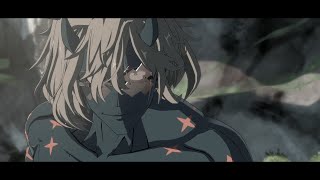 In earlier Guilty Gear games you were able to mash out most combos which made confirming the more difficult ones easier. You are unable to do this in Strive as button mashing will knock your opponent backwards and out of your combo. The result of this is it will prevent you from putting together follow-up moves to deal more damage.

You can however get around this by delaying your button presses slightly, if you do this correctly you will be able to keep your combo together. This though is tricky as the delay time is different for each character, delaying too long gives your adversary the opportunity to block and if you move too quickly you will be back in neutral.

Button Mashing is Punished
In Guity Gear Strive there are 15 characters from which to choose from. Each of which has unique abilities that play completely different from one another. Resist the temptation of making regular use of each character and instead pick the one that best suits your playstyle, so you can focus on learning the game's core aspects. If you are a new player with no prior experience playing Guilty Gear games, it is recommended that you pick a character that appeals to you and stick with it until you have developed a feel for the gameplay.
Players of previous installments of the Guilty Gear series will only know too well that the key to winning in this competitive multiplayer game often lies in liberal movement. By continually staying on the move you will be able to stay one step ahead of your opponent with bait, mixups, and pressure. Hesitating and being reluctant to act will give your adversary the time they need to take advantage of your weaknesses.
Guilty Gear games have a reputation of being difficult and complex games to learn, and Strive is no different. If you are a new player with no previous experience with Guilty Gear games, it is recommended that you first play the tutorial, so you are fully understanding how the gameplay elements work. The tutorial mode offers a mission that will quickly teach you the game and test your responses and strategies in various situations.
In previous installments of Guilty Gear the Gatling system enabled you to chain 'punch' into 'kick' into 'slash' into 'heavy' and finally into 'dust' which made basic combos quite easy. It also made it possible to put together long combos which gave you plenty of options. Strive has changed this, the Gatling system is now shorter. Most combos now start from 'slash' so your options are more limited. Although the combos you put together in Strive are shorter they are more damaging and easier to learn. Take a look at the video below to find out more about Gatlings and Roman Cancels in Guilty Gear Strive. 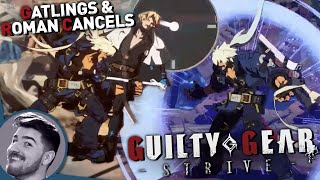 A Starter Guide to Gatlings and Roman Cancels
Guilty Gear games are a continuous learning process as new installments in the series feature additional content. Regardless if you are a seasoned pro or a complete novice, you can always look to increase your knowledge of the game to become a better player by learning from others. Great places where you can do this are YouTube guides, pro players' Twitch streams, and competitive discord servers.
The characters in Guilty Gear Strive are capable of dealing high damage with their combos, so it is crucial that you know how to protect yourself, so you can minimize the amount of damage you take as much as possible. It is therefore essential that you learn when to block high, when to block low, and when to counterattack as these are skills that will save you during a fight. Don't just sit on your Tension waiting to use it on big offensive combos, it is just as important to use it on defense where it will block an adversaries attack and push them back.
Tension in the Guilty Gear series is a gameplay mechanic and an extremely important resource that directly affects many of a character's offensive and defensive options during combat. It is accumulated in the Tension Gauge and it's power increases whenever the character uses aggressive moves like moving forward, dashing, forward jumps, and attacks.

Unlike previous installments in the Guilty Gear series, you won't have the opportunity to build a lot of Tension in a round as combos hit hard in Strive, which generally means short matches. It is therefore crucial that you use your Tension wisely. Don't be afraid to spend it as Tension resets between rounds.
Guilty Gear Strive Questions & Answers
Our Latest Questions
What is a Roman Cancel?
What is a Psych Burst?
What is the best strategy against opponents who ..
See All Questions
Have a question for Guilty Gear Strive?