Cheats, Tips and Questions for Godfall

Godfall is a thrid-person high fantasy role-playing game that is split into the realms of Earth, Water, and Air. You take the role of Orin, the last of the exalted Knight's Order and a fallen king who has to prevent a major apocalyptic event. Betrayed by his brother Macros, Orin has to marshal his strength and find a lot of loot to defeat his brother and his generals. Godfall is available on PlayStation 5 and PC. Take a look at our tips to get help in the game.

The loot that you find during Godfall, such as weapons, charms, rings, and other equipment will dictate your stats, these include health and damage. It is therefore important that you consider certain things before slotting new items into your Valorplate. To have the best gear possible you need to check the rarity or colour of the gear, making sure you give gear that is purple of higher closer inspection, compare it's stats to see if it will optimise your equipped items and also see if it has any useful bonus perks attached.
The loot that you find in Godfall is random and you will be relying on luck to get the best gear. You will though however have complete control over the skills you unlock via the Skill points you earn from levelling up and completing certain missions or Merits. Godfall's skill grid gives you a preview of all the skills you can unlock and although it is possible to unlock all of them it is recommended that you prioritize some over others. These include wider parry windows, critical chance/damage boosts, Weapon Technique enhancements, and Deathblow.
As the combat in Godfall is predominantly melee based it is essential that you master how to parry as soon as you can. You can trigger a parry just as an enemy attack is about to land by pressing the block button on your controller. When you parry an enemy during combat you will temporarily stun your foe or deflect procjectiles. Combine the parry technique with the Deathblow Skill to perform a devestating couunterattack which will annihilate enemies.
The camera that is used in Godfall emphasises the game's cimematic combat and you will find yourself regularly being slashed and shot at by enemies who are off-screen. It is therefore essential that you keep your eye on the arrow-shaped indicators around your character which flash whenever an attack is incoming. Knowing that you are being attacked will enable you to take the necessary action to deal with the situation before it is too late.
Although the combat in Godfall is pretty straighforward you may want to consider visiting the Training area every so often to test new weapon movesets and skills you may have unlocked and try new combos with them. It also gives you the opportunity to give yourself a quick refresh of the combat controls. 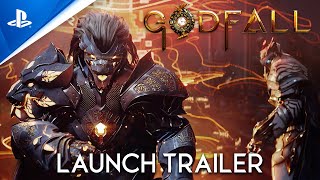 Godfall Trailer
An effective way to despatch enemies in Godfall is to perform a Takedown which will either kill an enemy outright or will at least drain most of their health. In order to trigger a Takedown you must first Breach an enemy by dealing stun damage so you increase the yellow bar beneath their health counter. When you have the third level of the Takedown Skill you will be able to take down regular enemies if you parry them if they're at 40% health or below.
Don't forget to use Orin's Spirit Vision in order to scout an area for collectibles, hidden objectives, or points of interest. When you use Spirit Vision the screen will darken while highlighting chests, collectibles, and hidden objectives in a glowing light. The hidden objectives will be display as red beacons and are worthwhile persuing as they can often lead to decent loot drops if you can decipeher their puzzles.
Make sure you use your full arsenal of capabilities to dominate battles. Don't just rely on your light and heavy combos during combat but instead use every attack and special power at your disposal against your enemies. This means alternating between your Weapon Techniques, Polarity Charge strikes, Shield Throws, and your Archon Fury ultimate.
In Godfall Merits act as an in-game achievements system that rewards you for completing certain tasks, such as killing specific enemy types to opening chests. Make sure you are tracking Merits in the menu as the hefty rewards they give make them worthwhile completing.
Godfall Questions & Answers
Have a question for Godfall?
Achievements & Trophies

There are 46 achievements for Godfall on PlayStation 5.