Cheats, Tips and Questions for Ghostrunner

Ghostrunner is a first-person action-platformer set a in a dystopian Cyberpunk future. You play as a Ghostrunner who is awoken by The Architect, a prisoner, who in a last bid attempt to save himself calls upon you. Climb Dharma Tower, humanity's last shelter, after a world-ending cataclysm. Make your way up from the bottom to the top, confront the tyrannical Keymaster, and take your revenge. Ghostrunner is available on PlayStation 4, Xbox One, Switch, and PC. Take a look at our tips to get help in the game.

Ghostrunner is not the easiest game to play and there is without a doubt an initial learning curve you need to get past before you can make significant progress. The main reason why Ghostrunner is such a difficult game is that every single attack in the game is essentially a killing blow if it finds it's target. All enemies can be taken down with one strike from your katana and you too will die if you take a single hit. As a Ghostrunner, you have the ability to run on walls and dash through the air and it is curcial in order to survive combat encounters that you take advantage of these moves to dodge incoming attacks and move around while slashing at enemies. 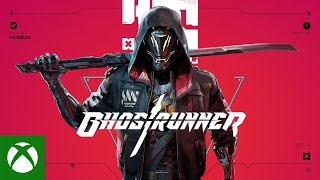 Ghostrunner Trailer
The most important thing you need to remember when playing Ghostrunner is that all progress is reset when you quit the game. Therefore you need to make sure you finish a level before you decide to exit the game otherwise you will find yourself back at the start of the whole map on reboot.
Learn How to Parry
Before a normal projectile or bullet is about to hit you it can be parried by hitting the attack button. Although parrying iself is simple, getting the timing right is crucial. Once you become adept at parrying you will find multiple sections of the game a lot easier to progress through. Parrying is the only way in which you will be able to defeat the Wardens when you encouner them. When parrying against the Wardens you need to wait until you see the Warden's sword flash and then hit the attack button to parry at the count of two.
In Ghostrunner enemy shield generators come in the form of orbs that you need to destroy. It is important that you always prioritize and destroy these shield generators before you engage in combat with the enemies because connected enemies will remain invulnerable until these shield generators are disabled.
Try to stay airborne during combat in Ghostrunner as much as possible as doing so gives you access to the slow down effect of the dash while running on the ground does not. This slow down effect you get from the dash is particularly useful when wall-running as the enemies with rapid-fire weapons will have trouble hitting you. You also have a secondary that gives you the ability to deflect shots straight back at the enemy but you should avoid using this as it is a waste of your special. It is cheaper to use your katana to defelct shots. Use your abilities whenever possible as they can make a big difference during combat.
The combat in Ghostrunner is kinetic and well designed as each arena gives you all the tools you will need to defeat your enemies. If however you do find yourself struggling in certain environments it may be time to change the modifications on your cyborg so you can try a new approach to the challenge. As you progress through the game unlocking more abilities you will be able to do more advanced modifications which will enable you to try different combinations and strategies that may help you proceed up the the tower.
Hel is one of the toughest bosses in Ghostrunner to defeat. After chasing her for most of the game you will eventually confront her in the 'In Her Own Image' level which starts in a train compartment. To begin with you need to interact with the green terminal that is at the end of the train compartment in order to leave it. Upon doing so a short cutscene will play and the fight with Hel will begin.

Once you manage to parry Hel four times her stamina bar will completely deplete and you will be able to hit her. Make sure you hit her quickly otherwise her stamina bar will reset and you will need to begin the parrying process all over again. After being hit once Hel will jump to another platform and start firing projectiles at you. To reach the platform Hel is on you need to keep dodging her projectiles by wallrunning. Once you reach the platform you need to begin the process of parrying again until Hel has only one bar of health remaining. At this point in the fight her attacks become more aggressive and the projectiles she fires at you will increase in speed. You just need to keep jumping from platform to platform very fast without getting hit so you get close to her. Once you manage to get close to Hel she will stop firing projectiles and you will have to parry her for the last time which is not easy as her attacks have become faster. Once you manage to land one hit after depleting her stamina bar, Hel will be defeated. Defeating Hel will enable you to wield her sword, unlocking the Surge ability. 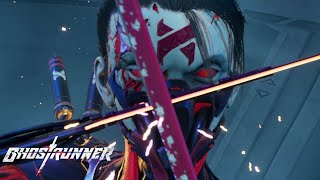 How to defeat Hel Boss in Ghostrunner
Ghostrunner Questions & Answers
Our Latest Questions
What does the Detector upgrade do?
What does the Focus Overlook skill do?
How do you unlock booster modules?
See All Questions
Have a question for Ghostrunner?
Achievements & Trophies

There are 34 trophies for Ghostrunner on PlayStation 4.