Jumping
To be successful in Fall Guys: Ultimate Knockout it is curcial that you master the art of jumping and due to the Fall Guys themselves possessing super small legs and a gangly large body it means that they can't jump so well. The only way you can become proficient at jumping in this game is by understanding the limitations of your character and timing the jump correctly. Every leap you take must be done so with caution otherwise you will find yourself dropping into the abyss.

Diving
Another important mechanic you need to master is diving which can be the deciding factor as to whether you qualify or eliminated when you try to outpace your rivals across the finish line. Dives can also be used to jump over hordes of crowds to get an advantage in levels like Door Dash and also to escape competitors who are trying to knock you out of the game. You will find in games such as Rock 'N' Roll and Fall Back combining jumps and dives works incredibly well for knocking the giant football around and scoring points.

Grabbing
Aside from jumping and diving your character in Fall Guys: Ultimate Knockout is also able to grab. This mechanic is a necessity for games like Egg Scramble, Tail Tag, and Royal Fumble. Grabbing will enable you to latch onto ledges when taking shortcuts in games such as Slime Climb or pulling yourself back up after falling short of the next platform. Grabbing can also be used to pull opponents back or hold them in place to annoy them. Make sure you grab the Crown to get the win in the finale of Fall Mountain and not just jump into the headdress. 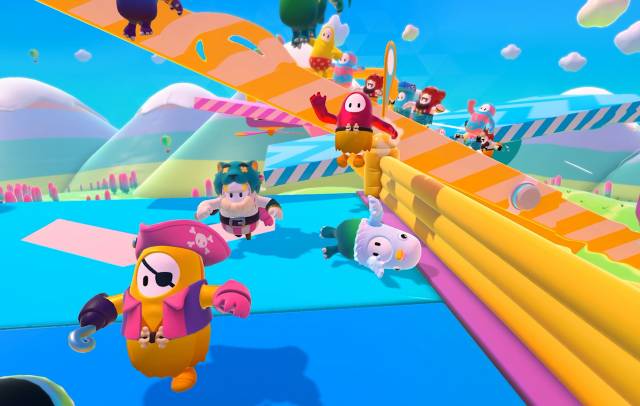 Keep Away from Other Players
In games such as Roll Out, Block Party, Perfect Match, and Jump Club it is important that you try and keep your space from other players at all times. Failing to do so will put you at risk of being grabbed hold off at the last second or knocked over just as the next obstacle is about to hit. Keep your eyes open and move away when another player closes in, but also make sure you don't let them win.

Work Together in Team Games
In Fall Guys: Ultimate Knockout there are certain games where you will be separated into different groups by colour and forced to work together to progress. In these games it is in your best interest to work with your new teammates any way you can in order to win the game and advance to the following round.

There are 35 trophies for Fall Guys: Ultimate Knockout on PlayStation 4.