Evil Genius 2 World Domination is a real-time strategy and simulation game where you are tasked to construct a criminal lair on a tropical island in order to build a doomsday device secretly while operating a casino as cover. This involves constructing different rooms, infrastructure and amenities to support the operation of the base and unlock new operations, and set up traps that kill infiltrating agents and maintain the base's defenses. Evil Genius 2 World Domination is available on PlayStation 4, PlayStation 5, Xbox One, Xbox Series X, and PC. Take a look at our tips to get help in the game. 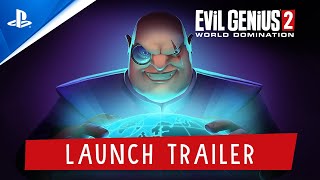 
Below is a collection of hints and tips that will help you to progress in the game. These include how to organize your lair and why you shouldn't rush.


At the start of the campaign you will have to select a Genius, each comes with their own unique campaign and favor different playstyles. Ex Mercenary Red Ivan (H.A.V.O.C) is all about firepower, Zalika (V.O.I.D) favors brains over brawn, investing heavily in the tech tree. Ex-Spymaster Emma (V.E.N.O.M) seeks to deceive her enemies into believing there's no threat until it's too late to stop her, and Maximillian (M.I.D.A.S) who is able to bring in enough gold to dabble in everything the others have to offer making him the ideal choice for first time players.


How you organize your lair is important in Evil Genius 2: World Domination. Make sure you have barracks for your minions scattered throughout the lair, so they spend less time walking to and from their beds. Build lockers in your barracks back-to-back to conserve space. To mitigate the damage an agent can do you should divide your lairs rooms into smaller areas. For example, don't build a single large room and fill it with all your generators, as doing so can result in disaster if an agent places a bomb there. Also protect your Vault with your ill-gotten gains by putting it far away from the main entrance.


You need to have lots of minions in order to work faster. Minions can be hired for $10,000 from the 'Minion' screen and as your lair expands with multiple rooms being added you need to add minions to utilize those rooms so that it results in an efficient workforce.


Hiring plenty of minions will result in an efficient workforce, providing they are trained. You need to build a prison in order to train the minions that you hire, this requires having a prison room and investigation chair. It is recommended that you train Scientists, Guards, then Technicians and Valets, in that order.


Avoid the temptation to rush ahead as the game's difficulty ramps up the further you get into the story. It is far more beneficial to take your time as you progress through side-objectives to research all the tech you can and upgrade your base to the level you want it before moving on in the missions.


Once you have recruited scientists, you will need to build a research laboratory to provide them with the tools they require. This means installing a Whiteboard, a Databank and an Impact Analyzer. Instead of unlocking a piece of every research tab it is recommended that you focus building up your lair in different areas. If you begin with the basic things it will eventually lead to unlocking different things. Once you have completed the main quest, the higher-tier research options will be unlocked. Below is a list of the different science minions and their role.

Add Tourists and Attractions to Cover the Operation


Your cover operation is the only thing that prevents your lair from being detected by the Agents sent to find evidence of your misdeeds, so you need to make sure you have as many tourists and attractions as possible in order to fool them. Make sure you train the minions you place there in Deception. Avoid disposing Agents because if you get rid of enough of them you will find yourself dealing with heavily armed soldiers.


Henchmen in Evil Genius 2: World Domination are powerful underlings who you can directly control and who will also operate independently if given no commands. You can have up to five Henchmen at any one time, and they are unlocked by completing side-objectives. Henchmen can be used as the guards around your lair.


Make sure you time now and then to scan your lair for suspicious characters and then dispatch a Henchmen to deal with them. It is important that you do this because the Smarts and Morale of minions will drop if they have been working for long periods of time and can be easily fooled by agents. Henchmen are far more astute than minions and won't fool for any tricks.


Traps are used in Evil Genius 2: World Domination to hinder the progress of agents and other enemies in their attempt to infiltrate your base. By building and wiring together sensors and traps, you can make sure no Agent makes it out of your lair alive. A good combo early in the game is the Fan Trap which will blow Agents a large distance, triggering any other trap they hit on their way, combined with a series of boxing gloves that will deliver devastating punches.