Cheats, Tips and Questions for Ender Lilies: Quietus Of The Knights

Ender Lilies Quietus Of The Knights is a 2D Action RPG about unraveling the mysteries of a destroyed kingdom. The story follows Lily, the last surviving priestess in a land devestated by an endless and oppressive rain that drives living things demented and transforms them into undead while granting immortality. Awakening in a church with no recollection of recent events, Lily turns to exploring beyond the safety of the sanctuary to find the source of the rain. Along the way, Lily can summon the spirits of purified undead to protect her. Lilly must overcome the hardships of her journey and reach the truth with the fallen knights. Ender Lilies Quietus Of The Knights is available on PlayStation 4, PlayStation 5, Xbox One, Xbox Series X, and PC. Take a look at our tips to get help in the game. 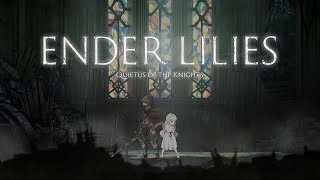 If you find yourself continually being beaten by a boss, you need to consider taking another route into a new area. By doing this you will be able to level up, find valuable loot, and clear your head. You then have the option of continuing along the new route to see where it leads, or return to take on the boss that was giving you problems. Don't get frustrated by constantly throwing yourself at a boss, or formidable enemy.
Ender Lilies: Quietus Of The Knights is a Metroidvania game, which means you will not be able to do everything from the start and will have to revisit areas with newly obtained abilities in order to progress. Simply by exploring every nook and cranny in the world, you will be able to find a plethora of useful things that will help you make the game more manageable. These include permanent health upgrades, passive abilities, additional rune slots, and the runes themselves.
As you progress through the world of Ender Lilies: Quietus of the Knights make sure you break the environmental objects such as barrels and crates that you come across as there is always the possibility they may be hiding something useful. An example of this is amulet fragments, which will enhance your health or make you stronger overall.
Unlike other games in the genre, you will not be punished if you die. You will not leave behind your possessions and be forced to fight back to where you died in order to retrieve them. In Ender Lilies: Quietus of the Knights, if you make a fatal mistake and die, nothing of consequence happens. You will keep the EXP you earned and also the items you gathered. You will though wake up at the last respite you rested and have to fight the enemies you encountered when you left there again.
Ender Lilies: Quietus of the Knights has an ability-based battle system instead of weapons. These abilities are called Spirit Skills and there are dozens you can obtain. Each zone in the game has a particular main boss, as well as a couple of minibosses that, when defeated, allows you to purify their souls which grants Lily their abilities. Once you are happy with your core-build of Spirit Skills, it is crucial that you start upgrading them.
At the start of your journey in Ender Lilies: Quietus Of The Knights you will have three Healing Prayers which can heal you for roughly 70 HP at a respite. You will be able to increase the amount healed later in the game through Priestess' Wishes and Relics. There is though the possibility that while traversing the map you will stumble across a healing flower that refills one of your Healing Prayers. Healing Prayers should only be used when necessary.
Respites in Ender Lilies: Quietus Of The Knights are safe zones that are used to heal, refill healing prayers, and save your progress. They come in different forms, often as a bed or a bench. As you progress further into the game respites can also be used to fast travel and upgrade Lily. Although there is a map in the game which shows you some environmental landmarks it does not show you the whereabouts of respites, therefore you need to make a mental note as to where they are in relativity with the landmarks on the map. This is important as it will ensure you always know where to go to heal and save.
Similar to lots of other games in the genre, you will need to study the enemy's attack patterns in order to decipher their strengths and weaknesses. Doing this will let you know when to land an attack, or back off, which can be crucial in a punishing game like Ender Lilies: Quietus of the Knights. You will see many of the same enemies as you progress through the game, and after a while you will know exactly how they operate and react to you, which will allow you to easily defeat them.
Scattered throughout the world of Ender Lilies: Quietus Of The Knights are items called Relics, and it is essential that you find and equip them to Lily as they enable her to gain special benefits that include improved healing, EXP buffs, and stat boosts. Not only will Relics help Lily take down bosses a lot easier, they will also allow you to unlock new areas in the story.
Ender Lilies: Quietus Of The Knights Questions & Answers
Our Latest Questions
How do you upgrade Spirit Skills?
What do the flowers do?
What can respites be used for?
See All Questions
Have a question for Ender Lilies: Quietus Of The Knights?