Eldest Souls is a RPG that is heavily influenced by Dark Souls and other Souls-like games. This pixel-art, adventure combines worldbuilding with the fast-paced action of boss-rush classics. In Eldest Souls, you play a nameless warrior who explores the vast, forgotten Citadel, in search of the Old Gods. The temple-prison contains NPC's, quests and mysteries. Encounters with the Old Gods will be dangerous and often deadly, but fortune favors the bold and defeating them will grant you powers beyond mortal comprehension. Eldest Souls is available on PlayStation 4, PlayStation 5, Xbox One, Xbox Series X, Switch and PC. Take a look at our tips to get help in the game. 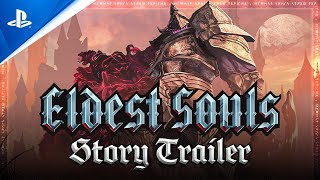 The Empty Vessel in Eldest Souls is a quest that enables you to collect the essence of a particular boss that you have already defeated. Simply return to the location where you defeated the boss and pick it up. All you then need to do is bring the filled vial to the NPC that you pledged to, and they will reward you with a special item, accessory, or relic. You can only collect one type of essence in each play through and unlike skills and shards they will be removed from your inventory when you start New Game Plus.
The key to defeating the bosses in Eldest Souls is to be patient and not be greedy when attacking them. If you study the boss you are fighting, you will find a pattern or two that gives you an opening you can take advantage of to deal massive damage. It is essential that you make sure you are paying attention during the fight because the bosses in Eldest Souls will punish you if you make a careless mistake.
In order to unlock New Game Plus and Arena Mode in Eldest Souls you need to beat the game once. This though is not easy, the difficulty is brutal, and you will find your hero dying a lot. Eldest Souls has 10 bosses to fight in the campaign and when you successfully complete it and get to the end credits New Game Plus will be unlocked. In New Game Plus you retain all your skill points and shards, but you will lose your special items/vessel.
Arena mode will become available once you have beaten the campaign in Eldest Souls. When you play Arena mode, you will be spawned into a small chamber that lets you select any of the bosses that you have previously defeated. As you defeat enemies, tougher variants of these bosses will become unlocked. Take advantage of Arena Mode to tweak your skill tree and shards and practice against the enemies there.
In Eldest Souls, there are no healing items of any kind that you can use to refill your health. Instead, it is your charge attack that heals you, whenever you land a charged forward slash you will heal your hero and be in Bloodthirst mode. This is the only way in the game that you will be able to replenish your life meter. The damage you dish out when in Bloodthirst mode allows you to siphon health points from the enemy with every attack you unleash. The charge attack is slow, so you need to time it right.
Eldest Souls offers three fighting styles to choose from for your build, and you can switch between them anytime before a fight. Each of the fighting styles is unique and comes with their own skill trees, which you can invest the Skill Points you earn to unlock a new skill or a boost or a bonus to an already unlocked skill. You can respec anytime for free, there is no additional cost or penalty for doing so. The three fighting styles are Windslide, Berserk Slash, and Counter. If none of the fighting styles suits your playstyle you can mix and match skills and abilities to create a more diverse build.
If you dodge through an attack, and you flash green, it indicates you have landed a perfect dodge. It is always worthwhile trying to perform perfect dodges in Eldest Souls, as some skills will reward you for dodging right.
Eldest Souls Questions & Answers
Have a question for Eldest Souls?