Contra: Rogue Corps is a run and gun game in the Contra series. In 2638 A.D., two years after the Alien Wars had ended, a mysterious area called the Damned City arose from the grounds where the final battles took place. Ruthless fiends roam this post-apocalyptic area, bringing a world full of madness. You play the role of the Rogue Corps, a former military group of mercs, scrappers, and bounty hunters who are known as the Jaegers. Contra: Rogue Corps is available on PlayStation 4, Xbox One, Switch, and PC. Take a look at out tips to get help in the game. 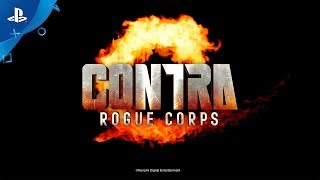 To get the Drill Instructor achievement/trophy you must use a finishing move with Kaiser 50 times. In Contra: Rogue Corps a finishing move can only be performed on a Gold Enemy which you will want to do anyway as it is an opportunity to fully replenish your health. As this achievement/trophy is character specific it must be done using Kaiser. The easiest way in which to do this is to dash into a Gold Enemy until it is stunned which will be inicated by stars appearing over their head and then perform the Drill Finisher move. Repeat this 50 times to get the achievement/trophy. Note: Lance Bean and Bill Rizer can also be used to get this achievement/trophy as they are skins for Kaiser.
To get the Who am I? Achievement/trophy you need to collect all 4 body parts of Rare or above and equip them in the 'surgery room' in the main hub. This basically means you need to assign one body part to Brain, Eyes, Chest, and Heart. This will require a bit of luck as the pickups in missions are random. If you are struggling to obtain a certain body part you can always purchase what you need using money in the 'Black Market' menu.
The Elite Mercenary is a secret achievement/trophy and by far the most difficult one to get in the game as you need to ge an S-Rank on all the main missions (this does not include the exploration missions). In order to get an S-Rank certain requirements must be met, you must complete the mission with at least 10 minutes left on the clock, get a high number of kills, and collect around 75% of the golden cannisters. Meeting two of these three requirements should be enough to get the overall S-Rank.
You do not have to stick with the weapons each of the four characters starts the game with. Weapons can be purchased from the Workshop in Base Camp by selecting the 'Purchase Weapons' option and then equipped via the 'Customize' menu. You also have the option to develop new weapons by visiting the 'Development' screen. This process requires both money and B.A.D. Mods, all you need to do is select the B.A.D. Mods that are no longer required up until the necessary points value and then providing you have enough money select the 'Execute' option at the bottom of the screen. Once you have done this the weapon will become available for you to equip via the 'Customize' screen. It is recommended that you try to buy and develop as many weapons as possible to increase your options during the various missions in the game.
Contra: Rogue Corps Questions & Answers
Our Latest Questions
Is there a guide for all the body parts and weap..
How do you get infinite life?
Any cheats for contra rogue corps on xbox one
See All Questions
Have a question for Contra: Rogue Corps?
Videos

Join us on Discord
Are you an expert in this game? Can you help Contra: Rogue Corps players?
Reviews
No reviews listed yet.