The worlds of Soccer and Anime converge in Captain Tsubasa: Rise of New Champions in this arcade football game that is based on the Captain Tsubasa series and chronicles the athletic exploits of Tsubasa Ozora as he advances through the ranks of multiple Soccer leagues.

It is essential if you want to be successful in Captain Tsubasa: Rise of the New Champions that you have a solid last line of defense as this can be the difference between victory and defeat. It is inevitable that there will be times you will lose possession of the ball and will need to get defenders back to block shots. An effective way to do this is to set up the Final Wall Formation. 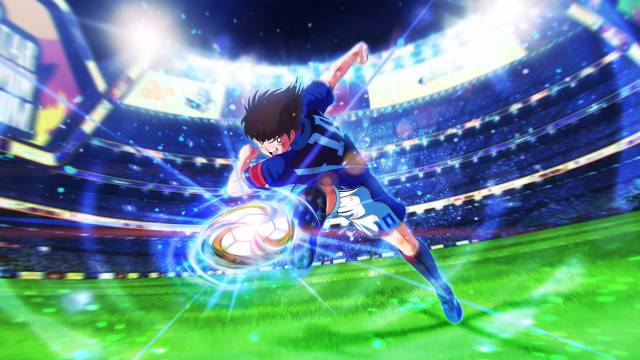 How to Change into the Final Wall Formation
During a match press the button you assigned on your d-pad controller to get your players into this formation.

How to Block the Shot in the Final Wall Formation
Providing you players are in the Final Wall Formation and the defender you initially selected is in position between the shooter and the goal you will block or weaken the shot.
In Captain Tsubasa: Rise of New Champions you have a V-Gauge, this is the yellow meter at the bottom of the screen that is positioned directly below the display of the character you are currently controlling. The V-Gauge fills up slowly over time, it also becomes filled when you perform actions such as tackles, dribble moves or shots during a game. Once the V-Gauge is completely filled you can use it to perform Super Saves and activate V-Zone whenever you feel it will benefit your team. To use your V-Gauge press L2 on your controller.

What are Super Saves
When your V-Gauge is full you can activate it by pressing L2 to perform a Super Save which will block your opponents shot. A Super Save will stop a shot 100% of the time and should only be used in the most important situations.

What is V-Zone
When you don't have the ball and you have a full V-Gauge you can activate the V-Zone which will either help you regain possession of the ball or attack your opponents goal if you have the ball. V-zone increases the recovering rate of Spirit, and the Kick Gauge increase rate of all team members are boosted for a certain amount of time.

Summary on how to use the V-Gauge

How to Fill the V-Gauge
This happens over time and whenever you perform an action during the match.

How to Activate the V-Gauge
Press L2 on your controller to use up your V-Gauge and perform a Super Save or activate V-Zone.
If you are struggling to score in Captain Tsubasa Rise of New Champions with a standard shot or even a Super Shot then you need to think about doing a hidden shot, keep in mind though that not not every player has access to a Hidden Shot.

These kicks start out the same as any other kick by holding Square on your controller in order to charge the shot on goal. The only difference is that you need to press and hold L1 as you release the charge button. When you then release that left shoulder button you will see the name of the shot change from a Charged or Super Shot to a Hidden Shot. If you let go of the shoulder button before releasing the shot you will not perform the Hidden Shot.

You can find out which characters in Captain Tsubasa Rise of New Champions have Hidden Shots by going to Ultimate Edit, then Character Edit. Here you will be able to see the Skills and Moves of each individual character in the game. Hidden Shot variations are indicated by having a star at the beginning of the name.

Summary on how to Perform the Hidden Shot

How to Charge a Shot Fully
Hold down Square on your crontroller until the shot meter is fully charged, but do not release it yet.

How to use your Hidden Shot
Press and hold L1 on your controller and let go of the Shot button. In order for the Hidden Shot to work you must continue holding the left shoulder button until after you let go of the shot button.
Although passing the ball to a teammate will often get you in the position you want to be on goal to take a shot there will be times you will want to take the ball yourself past the defender or there may not be an open lane to pass the ball. When you are in this situation you have two options to escape the defenders tackle and get past them. You can either press R1 on your controller to simply dash past them with a sprint which you can maintain by continuing to keep hold of R1 or alternately if you have some excess Spirit in your Spirit gauge you can use a characters's Dribbling Move to escape the defenders tackle. This is performed by pressing the R2 button on your controller.

Summary on how to perform a Dribble Move.

How to Perform a Dribble Move
When you are near the defender either press R1 on your controller to dash past them or press the R2 button on your controller to use your characters unique Dribbling Move. You must be close to the defender intent on tackling you otherwise both of these moves will not work.
Captain Tsubasa: Rise of New Champions Questions & Answers
Our Latest Questions
Hi, I want to customize the voice of the Dutch t..
See All Questions
Have a question for Captain Tsubasa: Rise of New Champions?
Videos

Join us on Discord
Are you an expert in this game? Can you help Captain Tsubasa: Rise of New Champions players?
Reviews
No reviews listed yet.