Ben 10: Power Trip is a 3D platformer that takes place in the animated universe of Ben Tennyson, where he uses his trusted Omnitrix to transform into different alien creatures and save the world. Evil Hex has cursed Europe - and only Ben 10 can stop him. This game is aimed at a younger audience and offers an engaging story mode packed with fun and varied missions, as well as a big open world that's ripe for exploring. Ben 10: Power Trip is available on PlayStation 4, Xbox One, Switch, and PC. Take a look at our tips to get help in the game.

As you progress through Ben 10: Power Trip you will be able to collect coins by completing missions, defeating enemies, or just by exploring the environment. These coins can then be spent on in-game items such as treasure maps that reveal the location of collectibles and upgrades to improve Bens stats.

The following trick will enable you to quickly collect coins. Travel to Chop Hollow which is located in the top-right corner of the in-game map and go to the center of the wide open work area to where a lumberjack is standing next to a large wood chipper. Now make your way to the top of the wood pile next to the wood chipper and transform into Four Arms, the red skinned, well-developed humanoid alien that is approximately twelve feet tall and has two pairs of four-fingered arms. Once transformed press the appropriate button to pick up a large rock. Face the wood chipper and press the button again to toss the rock into the wood chipper. Even though the rock isn't wood, the wood chipper will still spit out five coins for you to collect. Keep picking up rocks and repeating this process to get as many coins as you want, once you have the desired amount of coins you simply have to jump off of the wood pile and collect them.
Ben has a useful double jump ability which will help him get to things that appear out of his reach such as higher platforms and the coins that can be found in the forest and nature park. Ben will not have access to the double jump ability immediately but he will aquire it very quickly. This will happen when he unlocks Heatblast during the first few minutes of the game. If you are familiar with the Ben 10 franchise you will know that Ben has control of various alien companions who each have special abilities. One of these is Heatblast who is able to double jump. Whenever Ben equips Heatblast by selecting him with the d-pad he will be able to double jump by pressing the jump button twice (X on Playstation 4 and A on Xbox One) on your controller.
Although Ben has a scooter which he can use to get around the world this can be a tedious mode of transport if you need to get from ones side of the map to another. There is a way to fast travel which will enable you to reach different areas of the map almost immediately and save a lot of time but in order to do so you must first unlock a fast travel point which can only be achieved by visiting each area of the map at least once. Once you have unlocked a fast travel point, Ben's Grandpa and his campa van will appear on the map. You then simply have to approach Grandpa and talk to him, he will then ask you where you want to travel to and you will be able to select a destination from a map. You will not be able to fast travel if you are currently in a mission, it is only available when you are freely roaming the world.
In order to play Ben 10: Power Trip in split-screen multiplayer mode (there's only local co-op, no online play) you need to find the camper van that Ben and his companions are travelling around in. This can be easily achieved by opening the pause menu and looking on the map for the camper van icon. There are multiple camper van icons scattered throughout the game's map for quick travel, you just need to head towards the nearest one. Once you have reached a camper van you need to talk to Kevin Levin, upon doing so the game will ask you if you would like to play in co-op. You now simply have to press 'yes'. 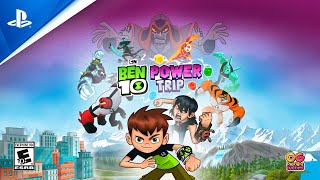 There are 29 trophies for Ben 10: Power Trip on PlayStation 4.

Join us on Discord
Are you an expert in this game? Can you help Ben 10: Power Trip players?
Reviews
No reviews listed yet.