Stubbs the Zombie in Rebel Without a Pulses Codes & Tips

Codes, Tips and Questions for Stubbs the Zombie in Rebel Without a Pulses

Home Stubbs the Zombie in Rebel Without a Pulses
Last Updated: Apr 28th 2021 by Dennis 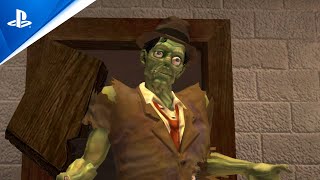 Stubbs the Zombie in Rebel Without a Pulse Trailer

To get the First Law of Robotics achievement/trophy you need to get killed by a robot. It is recommended that you wait until you reach the level 'The Doctor Will See You Now' where it will be easier to unlock as the robots are under powered before then if you play on the Normal or Easy difficulty setting.

To begin with you need to fight your way up the multiple floors of the laboratory until you reach a room with two scientists and two robots. When you enter the laboratory the robots will attack you until you press a red button which is on the other side of the room from where you enter. Playing on higher difficulties will generally result in you getting killed here by them which will unlock the achievement/trophy.
To get the Bahhh-Barian achievement/trophy you shouldn't pet the sheep. You will be able to get this in Chapter 7 - Fall of the house of Otis. Progress through the first section of the frame as usual. When you reach the second section you will see a flock of sheep inside a pen. All you need to do to unlock the achievement/trophy is go to the pen, jump over the fence and kick one of the sheep.
To get the Stubbs Otaku achievement/trophy you need to complete the Game on the Insane Difficulty setting. It is recommended to make this a lot easier you play on Co-op mode, so you can take advantage of the second controller. Even if you don't use the second controller you can use it as a spawn point to get infinite respawns. If you don't complete the game in one session or the game crashes you need to make sure you choose 'Resume' on the menu to retain your progress.
To get the It's a Real Groaner! Achievement/trophy you must 100% the dance battle. This is straight forward until you reach the 'double beats' section in round 4. The key to clearing this is to focus on the button press after the double beat. That way you do not miss the beat after the double. If you think of the double beat and the one after as three presses in a continuous rhythm you should have no problems providing you can keep up with the tempo as it is quite quick. You can pause at any time and if you missed a part of the sequence you need to remember you can record a clip while paused and watch it back until you feel confident on what you need to do.
To get the Plowed Up achievement/trophy you must get 5 tractor kills. You will get an opportunity to attempt this in Chapter 7 - Fall of the house of Otis during the third section when there's a tractor in the back which a farmer will drive it in towards you. All you need to do when the farmer jumps out is to jump in and run over 5 farmers who just so happen to be in the section where you get hold of the tractor.
To get the Strike! Achievement/trophy you must get 10 kills with a single Sputum Head. The ideal time in which to attempt this is when the Sputum Head is introduced during the level 'Painting the Town Red'. The Sputum Head allows Stubbs' head to be used as a bowling ball knocking people down and infecting them into zombies. Like the gut grenade the head explodes after a few seconds or can be remote detonated.

At the start of the 'Painting the Town Red' level run straight to the top of the parking garage, so you trigger a cutscene with a guide bot. It is important when you do this that you do not kill the SWAT guys that are near the cutscene trigger. Now wait for the SWAT guys to get close and there should be enough nearby to get the 10 kills you need.
Stubbs the Zombie in Rebel Without a Pulses Questions & Answers
Have a question for Stubbs the Zombie in Rebel Without a Pulses?